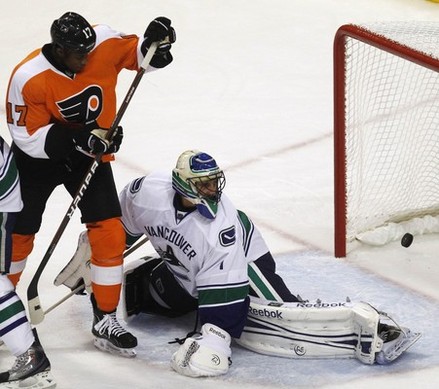 Considered the first true test of the season, the Flyers’ 5-4 win against the Vancouver Canucks has brought to light both strengths and weaknesses from this line-up.

As a final comment, the Flyers were much better with face-offs tonight. Sean Couturier finished with a 7-for-18 record in the circle, but the team as a whole finished with 52% success rate.  Danny Briere, who has remained relatively quiet thus far, won a healthy 11-for-17 puck drops.  Talbot also won more face-offs than he lost following a pedestrian record in the first two games.

Not to indulge in hyperbole, but the game-to-watch of the season will take place this Saturday night- Flyers versus Los Angeles Kings, featuring the return of… dun dun dun… Stefan Legein.

Oh, and Mike Richards and Simon Gagne, on a line together. Actually, Legein probably won’t play.  So just those other two dudes.