Richards Trade Was Blessing in Disguise 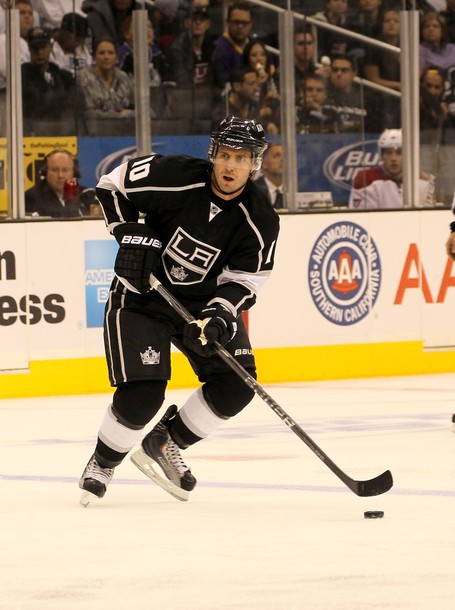 “It’s just as environment in the dressing room where you can come and relax and play hockey and focus on putting the energy on the ice instead of wasting a lot off it.”

That was former Flyers captain Mike Richards speaking about his short tenure with the Los Angeles Kings. He was quoted by Sarah Baicker, a writer for CSNPhilly who often shares duties with Tim Panaccio.

Perhaps I’m reading too much into it, but Richards may not have offered up anything if it was Panotch who was holding the microphone, as he was among a handful of reporters that didn’t get along with the 26-year old superstar.

When word broke that Richards had been traded back in June, it came as a complete shock to me. The guy who was always compared to Bobby Clarke was traded for Wayne Simmonds and a guy who is often compared to Mike Richards. Richards himself only learned about it from a text alert from the Hockey News.

Now that enough time has passed, though, it’s clear that the trade was a blessing in disguise for both Richards and the Flyers.

For the Flyers, there is a buzz around this team that hasn’t been heard since the 2007-08 season, when the team was blown up after finishing the prior season with the worst record in club history. As mentioned yesterday, the television ratings for the home opener were the highest in Comcast SportsNet’s history of covering the orange and black.

Imagine if this team got off to a 3-0 start and Richards was still here. Let’s also assume Ilya Bryzgalov was here and Jeff Carter wasn’t. What would the general reaction be? Would this have been “our year” or would fans have tepid expectations?

I’ve heard many fans justify the trades by arguing Richards was an alcoholic. Scott Hartnell, speaking about Richards yesterday, was quoted as saying, “A 24-year old multi-millionaire likes to have beers? What a shocker that is.”

The truth is that Paul Holmgren and Dean Lombardi made a good hockey trade for each party that needs no other justifications. Richards’ night life was not the issue that people made it out to be, and his future in Los Angeles is likely to be rid of those criticisms.

For Richards, it’s a fresh start in a new city with a young population and a very good hockey club. The Kings have good goaltending in Jonathan Quick and Jonathan Bernier, a solid defensive corps led by Drew Doughty and Jack Johnson, and now two legitimate top lines. He even convinced Simon Gagne to join him on the west coast.

Mike Richards now has the opportunity to play his game without the pressures of being a captain or the vitriol cast his direction from the Philly media and the fans who didn’t realize they bought into it.

It’s the best of both worlds, as Simmonds and Richards are both flourishing in different jerseys. Or another way to put it, it’s been a blessing on disguise.

Oh No, This Second Half Isn’t Starting Out Right