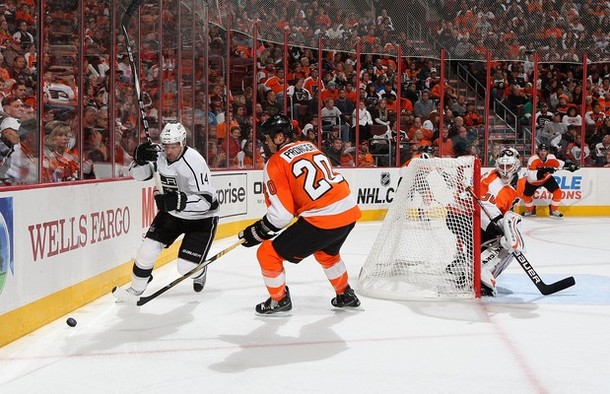 After a whirlwind summer of unexpected trades and free-agent signings, many were left wondering how the Flyers would respond when they finally hit the ice on October 6th, against the defending Stanley Cup Champion Boston Bruins.

A quick recap of all of the moves show that 9 of the 22 names on the opening night roster would be making their Philadelphia Flyers debuts come opening night against the Bruins. The biggest of the acquisitions, goaltender Ilya Bryzgalov, is considered a top 5 NHL goalie by many, something the Flyers have lacked in years. Perhaps the biggest shock was the signing of Jaromir Jagr, for as long as anyone can remember, Jagr was despised in Philadelphia.

The future Hall-of-Famer played for Flyers rivals New York Rangers, Pittsburgh Penguins, and the Washington Capitals before bolting for Russia for three years. Now a key member of the Flyers, Jagr will greatly improve the power-play and show the younger team members the hard work and dedication necessary to become an NHL superstar. Also signing, was gritty 4th line center Maxime Talbot—trading sides of the PA NHL rivalry from the Penguins. Capable of penalty-killing and solid face-off skills along with the ability to get under the other teams skin, Talbot will be a welcomed addition to the team.

In the Mike Richards trade with the Los Angeles Kings, the Flyers acquired top 5 draft pick Schenn and gritty winger Wayne Simmonds. Schenn, coveted by many GM’s who were trying to trade with the Kings, is bound to be a future superstar in the league. Simmonds, who will easily become a fan favorite for his hard-nosed style of play, is a young and has the potential to become an even better player.

Finally, in the Jeff Carter trade with the Columbus Blue Jackets, the Flyers picked up a first round draft pick, and winger Jakub Voracek. In Voracek, the Flyers were receiving a guy to replaced departed Ville Leino, but with more speed. Voracek will need to work hard night in and night out and improve his backchecking to become the complete player he is capable of becoming.

With the first round pick (8th overall), the Flyers selected Sean Couterier, who many believe to be the steal of the draft. NHL comparisons have him a similar player to Eric Staal.

After 6 games, the Flyers stand at 4-1-1. The team looks poised to be a Stanley Cup contender once again, even with all of the new additions. The defense corps of captain Chris Pronger, et al. are among the best in the league and Ilya Bryzgalov solidifying the goaltender position makes this Flyers team very good defensively.

Offensively, Claude Giroux has already taken his extreme talents even further in this young season with 5 goals in 6 games. Not only will Jaromir Jagr boost the power-play, but with the added attention by defenders, will allow teammates on the ice more room to score goals.

The development of Claude Giroux and James Van Riemsdyk and rookies Matt Read, Sean Couterier, and Brayden Schenn coupled with the veteran talent and experience on this team can only mean one thing: the Philadelphia Flyers are primed to take a run at Lord Stanley’s cup in June.