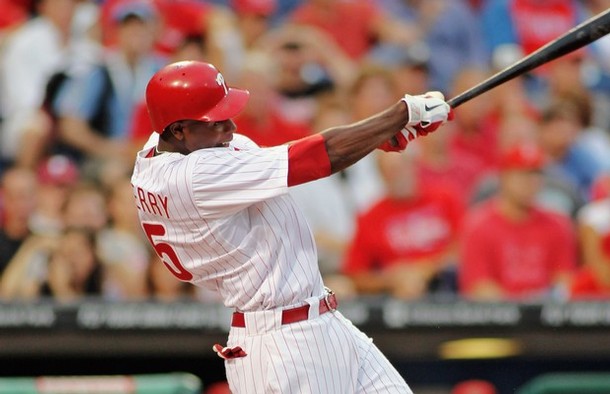 Come opening day of the 2012 baseball season, the Phillies will have Hunter Pence standing in right field and Shane Victorino a few hundred feet to the left in center.

While Pence may be the game’s biggest goof, his constant production jump started Philly’s offense immediately after his arrival from Houston. His numbers may have disappeared during the post-season, but you can’t knock a guy whose season average is over 100 points better than his average in the NLDS.

The Texan brings stability to the middle of Charlie Manuel’s lineup, not-to-mention a pretty good amount of pop in his unusual swing. His dynamic swing isn’t his only asset to the team, Pence is a pretty solid fielder as well. The quirky character only committed six errors in 153 games last year, while posting a fielding percentage of .980. Pence may not have a closet full of Gold Gloves but the 28-year-old can hold his own in the outfield.

On-the-other-hand, Victorino’s closet is over-flowing with Gold Gloves and that trend doesn’t seem to be stopping anytime soon. The Flying Hawaiian is the fastest guy on Philly’s roster and makes plays he has no business making. Sugar Shane did not commit one error last season and can cover ground with the best of them.

He captains the outfield and from a purely defensive standpoint is the most important player of the Phillies’ roster. Offensively, the speedy centerfielder isn’t going to dazzle you, but he’ll consistently finish the year with about 20 stolen bases. His power numbers will surprise you (17 homeruns this past season), but he has never had the contact numbers to be a solid lead-off man. He played very well batting fifth this post-season and with the addition of a left fielder with a little more pop than Raul Ibanez, Victornio can flourish.

If the Phillies choose not to upgrade third base, they need to get a solid bat in left field. There’s no hiding behind the fact that Ibanez will not be coming back to Philadelphia next year. His best years were behind him three years ago and after his worst full season in the pros, anything but cutting ties with the 39-year-old would be a mistake.

The original plan was to have John Mayberry Jr. start in left field, but after the injury to Ryan Howard, the Phils have been thinking about moving him to first base. If the Phillies decide 26-year-old prospect, Matt Rizzotti can’t handle the show, Mayberry will be seeing a lot of time at first base.

With Mayberry moving to first and Amaro Jr. deciding to keep Dominic Brown in the minors for another season, the Phillies are going to be shopping for a new left fielder. The first name that comes to mind is Kosuke Fukudome.
Although the highly-scouted Japanese outfielder may not have lived up to the hype, he is still yet to bat under .250 in four seasons in the pros. His homerun tallies are low, but in a very weak outfield free agent class, the solid contact hitter may be the best short-term fix.

Another option the Phils could pursue is David Dejesus. The Rutgers grad’s average was steadily improving in Kansas City, but a trade to the Athletics left him batting .240 this past season. Dejesus is a sound fielder and has a great act for getting on base.

Cody Ross also enters the market as a free agent this offseason. Now I think we all remember the way he devastated the Phillies in the 2010 post-season and although a lot of Philly fans may hate him, he can more than fill the void left by Raul Ibanez. Coming off a tough year, the normally solid hitter can bring a bit of pop to the lineup. He won’t be asking for much money and can be a cheap fix in the outfield until Mayberry moves back from first base.

The Phillies have a lot of options for left field, but with this weak free agent class, look for them to sign a cheap bat to fill a role in the middle of the lineup.

Eagles Still Have Time To Turn Things Around