Couturier to Remain with Flyers despite Long-Term Drawbacks 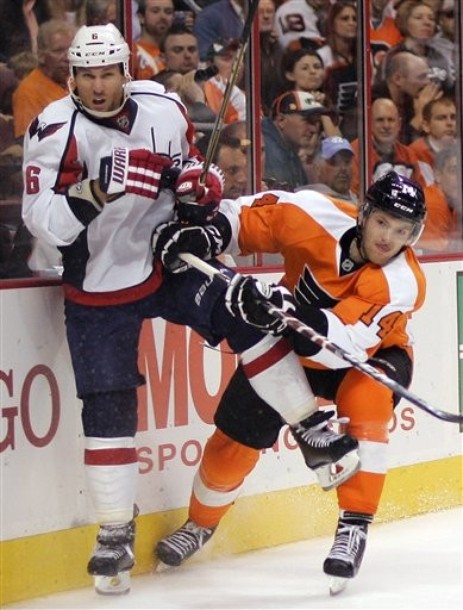 CSNPhilly, as well as several other media outlets, have reported that Flyers rookie Sean Couturier is expected to remain with the big club after he has played ten games (I posted yesterday that it was nine games, but that number refers to the amount of games allowed before an entry level contract can no longer “slide” beyond contract limits).

According to Tim Panaccio of CSNPhilly, his source’s reason for the extended stay is that, “There is no reason to [send him down].  He can learn just as easily here on the job.”

From a talent perspective, Couturier has proven that he is capable of pulling his weight at the NHL level without being a liability.  He is a very responsible player on the ice with a very mature hockey I.Q.  His efforts with the fourth line have also been consistent when other lines were struggling.

To suggest that “there is no reason” to send him back to juniors, however, is disingenuous and flat out short-sighted.

Let’s look back at how some recent draftees were utilized as 18-year-olds in the NHL.

All three players were drafted to teams that had such glaring offense, they spent the majority of their ice time with at least one other rookie.  In spite of each player having productive seasons, none of them experienced the playoffs because they were larger pieces of massive rebuilds.

The 2011-12 Flyers, meanwhile, are a team with no obvious holes in the line-up (assuming a healthy Chris Pronger, of course).  That’s not to say that they are “destined for the Cup,” but rather that Couturier’s skill set does not fill a glaring void.  As it stands, Couturier has seen his ATOI drop from 14:52 to 11:01 since his demotion to the fourth line with Max Talbot, Andreas Nodl and Jody Shelley.

For the casual fan, this is a case of “Who cares?”

In the grand scheme, however, this is a case of poor asset management.  Couturier spending more time in juniors would not “hurt” his development as much as it would prolong it.  It would also give him more time to fill out his 6’-4” frame to be even more valuable at the NHL level.

In the short-term, it would free up valuable cap space that could be used to bring up a seventh defenseman and a replacement forward.

In the long-term, it would also provide the Flyers with a cost effective option to fill a top six center position if Danny Briere’s age, injuries or salary begin to burden the organization.  If they felt they couldn’t re-sign Claude Giroux in three years and elected instead to trade him for top prospects (as they did with Mike Richards and Jeff Carter), they would still have a top NHL center for dirt cheap.

Instead, they are electing to utilize him now as a penalty killer (which can be filled by any number of cheaper players with lower talent ceilings) and as a linemate for Jody Shelley.  If he remains in the NHL for the next three years, he’s looking at a $4+ million contract as a 21 year-old in the NHL.

Despite the drawbacks, the decision has apparently been made.  Flyers fans will have the opportunity to watch Couturier flourish in Philadelphia, but may see more massive roster shuffles down the road in order to keep him on the team.

Holmgren & Laviolette Did The Right Thing By Keeping Couturier Here