Scouting Report On Cowboys Defense: Eagles Will Have Their Chances 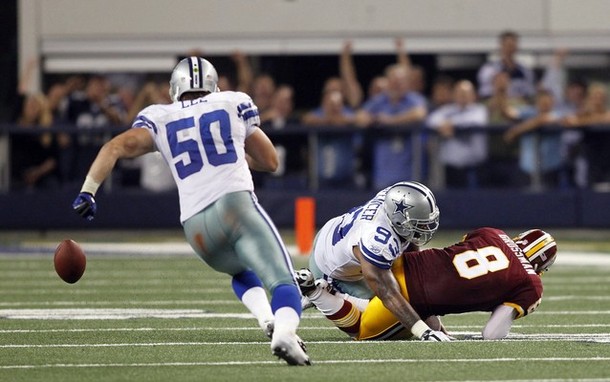 When the Cowboys come to the Linc on Sunday, the Eagles will have a tough test with the aggressive Cowboys defense. New defensive coordinator Rob Ryan will bring the heat up from Dallas, literally. Expect Michael Vick & Co to be blitzed more than they have all season. It’s just Ryan’s nature, wonder where he got it? Didn’t the Eagles used to have a head coach named Ryan? Anyway, this is a defense has played well thus far, through six games. The scary thing is that they are still jelling together, and they should get better. They have been somewhat up and down.

Take games against the Patriots and Lions, two very different games, both Dallas losses. Against the Lions, the Cowboys had the lead in the first half. Their defense was flying all over the field, making plays, and looking dominating in the process. However, they collapsed in the second half, thanks to partly to their sub-par secondary, and thanks also to turnovers on offense.

Against the Patriots, the Cowboys hung tough all game, even against Pats high octane aerial attack, but collapsed in the 4th quarter again. Characterized by Ups and downs, it just seems like this whole Dallas team is just an inconsistent bunch. This is expected, and their record 3-3, tells all. I’m going to dive into the Dallas defense, and then give points to Marty on how to attack.

The Cowboys defensive line, in the past has wreaked havoc on the Eagles offensive line. The main culprit in this is Cowboys DT Jay Ratliff. Ratliff will definitely bring the pressure inside, and it should be a challenge for the Eagles interior offensive line. Emphasis on Eagles rookie center Jason Kelce, who has never seen the likes of Ratliff or the kinds of pressure he and the Cowboys front seven can produce. The Cowboys have a solid group along the defensive line, and are pretty good in run defense.

They are first in the NFL in rushing yards per game. Their ends, Kenyon Coleman and Marcus Spears are solid

veterans, but are nothing special. They struggle to get up field and in rushing the passer. The Cowboys must get younger here in the future. They flirted with taking J.J. Watt in 1st round of the NFL Draft, and had interest in Eagles DT Cullen Jenkins in free agency. It’s clear that they agree with me. For the Eagles to be successful, they must keep Ratliff in check in the passing game, and make sure he can’t get into the backfield. Also, to expose the Cowboys slow ends, the Birds should look to run stretch and toss plays right to the outside. They will not be able to match LeSean McCoy’s east to west speed.

Know where DeMarcus Ware is. That’s the Eagles #1 priority when talking about the Cowboys LBs. He is a beast as a pass-rusher and is someone who scares offenses everywhere. Many people compare him to Lawrence Taylor because he is one of the best in the NFL at what he does. You should see more two TE sets for the Birds this Sunday just because Ware and his counterpart, Anthony Spencer because they have given the Eagles nightmares before.

However, the most pleasant surprise of the Cowboys defense this year has been the play of new starting ILB Sean Lee. Lee has been flying around all over the field this year, making plays and raising scouts eye brows. Lee is very athletic, and excels at creating turnovers. The core is rounded out by familiar veteran Bradie James, who has seen

better days, but is still solid. This group is a scary one for any defense, now that you add the dynamic of Lee, gets even scarier. The Cowboys will blitz, and the Eagles must be ready. Protection is key against this group. On third downs, the Birds may have to keep an extra back and TE to help in pass protection.

This is where the Eagles can capitalize with big plays against the Dallas secondary. The Cowboys defensive backs, especially their safeties, are a major weakness with big matchup problem. Both safeties are much better in defending the run, than pass coverage. They constantly get beat by bigger, faster players (see Johnson, Calvin). The Cowboys really shouldn’t play much zone, because of their safeties. I expect Terrance Newman and Mike Jenkins to man up and try to jam the Eagles receivers at the line of scrimmage. It has worked in the past against DeSean. If I were Rob Ryan, I would be afraid of playing too far off of Jackson and Jeremy Maclin, because they can easily find space in the middle and out run the Cowboys safeties.

It is a real weakness that has been talked about since the offseason. Cowboys aren’t in nearly as bad of a position with their corners. They aren’t nearly as deep as the Birds, but their top two of Terrance Newman and Mike Jenkins are solid. Newman is a more of a press corner, and Jenkins can play both. However, both have their weaknesses as well. Jenkins often plays too aggressive and finds himself out of position. Newman often gets beat by faster receivers, like Jackson. The Eagles should be able take advantage of the Cowboys weaknesses down the middle of

the field. Roll-outs and play action plays would be good to draw the safeties out of position for big gains.

Overall, the Cowboys come into the game ranked as the 7th overall defense in the NFL. However, the Eagles will have their chances to score points. They must be balanced. I stressed this in my last article. I think the Eagles can reach their potential on offense if they utilize LeSean McCoy in the run game early and often. They would also be wise utilizing quick passes, like they did against the Redskins. This neutralized the blitz, and got the Birds on the board early.

Getting a lead early is a priority. They must sustain consistent drives and take advantage of opportunities in the red zone. Protection is also key; they need to keep Vick from getting hit in the pocket. If Vick gets his time to throw the ball down the field against the Cowboys average secondary, then this could be a big game for the Eagles. Let’s hope that mischief night is an unlucky one for the Cowboys.

Here’s My College Football Six-Pack For The Weekend