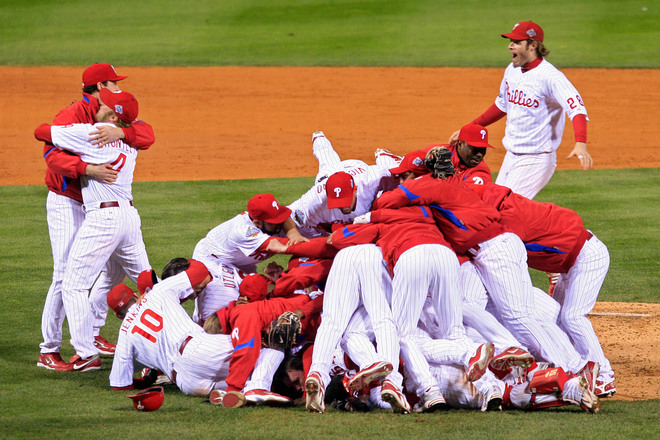 Ever since Ryan Howard’s ground ball rolled harmlessly to Nick Punto to end game 5 of the NLDS, and ended all hope of another Phillies world championship, there has been a lot of speculation on how to “fix” the Phillies. It’s

amazing that a team that not only set its own franchise record for wins in a season, but also had the MLB’s best record over that past two years needs to be fixed.

Jimmy Rollins, Ryan Madson, Roy Oswalt, and Raul Ibanez are all free agents. Howard is most likely out until mid-June at the earliest, and may never be the same. Chase Utley and Placido Polanco are shells of their former selves due to injuries. How is this team going to get back to its elite level?

The biggest issue this team has going into next year; who will play shortstop? The answer has to be Jimmy Rollins. I don’t care if he wants 7 years. They have to sign him. He is our Jeter. It’s no coincidence how good they are when he scores a run. With Freddy Galvis not quite ready in the minors, they must do everything possible to keep Rollins in red pinstripes.

Possible outside replacements could be Rafael Furcal or Jose Reyes. With the way Furcal played since being traded to St. Louis, I expect him to be re-signed. As for Reyes, all I have to do is point to the final game of the season, when he bunted for a single then took himself out of the game. Do you really want that guy on this team? I don’t.

Next up is closer. Ryan Madson is a free agent after a big year. His agent is Scott Boras. Later! By the time Scott Boras is finished, he is going to make Madson’s change up look better than a Mariano Rivera cutter, and he’ll squeeze every penny out of whatever team signs him. Odds are it won’t be the Phillies. Ruben Amaro Jr. has said the team is not comfortable going forward with what they have if Madson isn’t re-signed, so Antonio Bastardo, who struggled with his command down the stretch, is out.

Joe Nathan will be a free agent who could come cheap. Heath Bell could be a more expensive, long-term solution. The Phillies have somewhat of a history of paying for a good, bigger named closer. From Jose Mesa to Billy Wagner to Tom Gordon to Brad Lidge, the Phillies seem more comfortable with an established guy rather than a young, up-and-coming kid. I look for the Phils to go after Joe Nathan.

Barring a Flyers-like franchise changing trade, there isn’t really much room to improve the lineup. All but two positions, if healthy, are set today for next opening day. They’ll need a left fielder and a short term first baseman. Charlie Manuel and Amaro Jr. have said that John Mayberry Jr. will have every opportunity to become an everyday player, as he should. He earned it with his play this past season. His position is going to depend on which way the Philies decide they want to go.

If they go after a first baseman, he’ll play left field and vice-versa. Dom Brown could have a lot to do with the direction they go. If he can prove he’s gotten his confidence back and can play at the major league level, the replacement doesn’t have to come from outside the organization. Personally, I would like to see them sign a player who hits for average, more than power. Every year at the trade deadline, Michael Cuddyers name comes up. Pitchers aren’t scare of Ryan Howard anymore. You saw that in game 5 of the NLDS when La Russa intentionally walked Hunter Pence to get to him. They need someone behind him who will make them pay, and not necessarily with a home run.

When you have Roy Halladay, Cliff Lee, and Cole Hamels, there’s no need for a major overhaul of your roster, just some tweaking here and there. Amaro Jr. and Manuel have their work cut out for them this offseason. Take this past season as an example. This fan base will not accept anything less than a championship anymore. Not with this pitching staff. Not with all the all-stars. Not after the money they’ve spent to get to 204 consecutive sell outs.

The Difficulty of Finding Starting Goaltenders and Why Drafting is Critical

If J-Roll wants more than 3 years, he isn’t getting it here. Joe Nathan hasn’t been healthy in 6 years. He ain’t coming here. Look for them to sign Cuddyer & Bell, who they were rumored for 2 years, in getting. Wouldn’t it be nice if we wound with Bautista from Toronto. Source of mine. Real source, not the same as Paulman’s majic 8-ball. Sorry Paul. 😆 Amaro has alot of work to do. All of those bad contracts that were given, are really biting them in the @$$ now. Howard is probably the worst contract ever given, next to A-Roids 2 contracts. He is killing this team, & is absolutely un-tradeable. Thank God for 2008, because it might be awhile before we sniff another WS.

Howard is terrible? 116 rbi’s and 33 hr’s with some injuries? i think i missed something? oh i get it … all116 of his rbis came in the 9th inning when they were ahead by 6… not true! he has more go ahead rbis’ in the last 5 years than anybody. idiots keep coming on here saying how bad he is…. ridiculous. ignorant front runners.

haveacigar, Howard now a disappointment two post seasons in a row, clearly not clutch and clearly now his salary and injury a lead blanket

I’m pretty sure R. Howard gave us a 2-0 lead in a five game series right before Cliff Lee snatched defeat from the jaws of victory. Remember that? Remember 4 0 in game two of a five game series with our 140 million dollar pitcher on the mound. Keep it real yo. Don’t even get me started on our 2nd and 3rd basemen.

If lee held the lead howard was the mvp of th series….. 6 rbi’s in 2 games. you people hav no idea…he is not a disappoinment.

Who do you think we should get to play 1st base. ? unbelievable. absolute front runners.

Haveacigar, numbnuts, where in my comments, did I say Howard was terrible!? Learn how to read, dumb@$$. I said his contract & him are now un-tradeable, & that the contract was a bad contract. He did not deserve the contract he got, & especially at the time he did. If you think he did, your an idiot, & know nothing about sports. He is getting older, his skills have diminished, every year, the last 4, & now he has a major injury, that he could possibly never be the same from. He might not even play this season. That’s the points I was making. BTW, I’m far from a front runner. That’s the problem with some of you mindless dopes on here, you act like nobody can have an opened mind, & an honest opinion. Not everyone are blind loyalists, with no brain like some of you. Be your own man, & have an opinion, & not tow the company lines all the f^#@ing time! Jeesh!!!

Clueless, I’m right there with you brother!

Play Mayberry Jr at 1B until Howard returns from Injury and then Mayberry and then go to LF and & platoon Ibanez, who the Phils can Sign for a cheap 1-2 year Deal and at least you know what you get in Raul, a player who comes to the park every day ready to play amnd a good locker room/teammate guy..
Trade 2B Utley to the West Coast (Dodgers Padres,Angels) and maybe package a OF Dominic Brown or young Pitcher for a big time player in Return or simply trade Utley for a couple of high prospects and then shift Polanco to 2B and puruse a productive 3B with some Power (Aramis Ramirez of the Cubs or even David Wright of the Mets (who is still only 28 years old and could use a change of scenery from NY) and the Mets are looking to she payroll and will entertain offers for Wright and Bay.. maybe a Package of OF D Brown, P Worley and AA Pitcher could get Wright..
A player who is on the market is LF Carlos Quentin of the White Sox who is also only 28/29 years old and maybe the Phils could deal 3B Polanco & P Blanton Quenton if the Phils decide to keep Utley Keep Utley..

As far as avaialable closer, I would pursue Padres Heath Bell and stay away from Nathan wh ois used up.. 1 thinkg to keep in mind is that it’s rare for Pitchers and closers to switch leagues and remain effective, Different Parks, opponenets and unpires and Strike Zone.. Bell would be a natural and a fan favorite for his gruff and rough persona and is a take the ball and make no excuses type of guy and he would be a player that Manager Mauel would love to have on the squad.. Nathan coming off major surgery and missed most of this year, doesn’t know the National League, Parks, Players or Umps and has lost 3-4 MPH from his Fastball, he’s not CLoser Material anymore..

As far as the Coaching Staff
Let the Red Sox hire Bench Coach Pete Mackanin as their Manager and then slide Ryne Sanberg to replace him a Bench Coach and work with Manuel for the next 1-2 years for if there is not a path for Sandberg, he will go elsewhere and it will be history again for the Phils of making a mistake of letting him go again..