The Difficulty of Finding Starting Goaltenders and Why Drafting is Critical 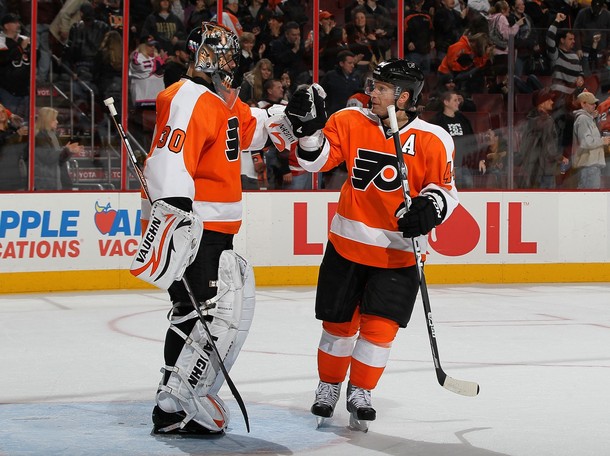 The trials of Ilya Bryzgalov have started early in his tenure as starting goaltender for the Philadelphia Flyers.  It’s not news that he has been fairly inconsistent since the beginning of the season, but considering the size of the contract the Flyers offered him, the expectations are nothing short of colossal.  In looking at how other starting goaltenders around the league were acquired, the failure to find a goaltender from within is a glaring factor in why the Flyers had to resort to breaking the bank for talent.

Nine teams, including the Flyers, chose free agency as the route to find a starting goaltender.

Free agency worked out very well for the Boston Bruins, as Tim Thomas has been a Vezina trophy winner and a Stanley Cup winner through his first three years with the black and gold, but the rest of the names are hit and miss.   Nikolai Khabibulin is leading the competition in the NHL right now with a 0.97 goals-against-average and 0.964 save percentage for the Edmonton Oilers, but that doesn’t seem sustainable with the defense in front of him.

Only Anaheim and Minnesota signed free agents who were undrafted and never played in the NHL before starting for their respective teams (similar to Sergei Bobrovsky).  Antti Niemi is excluded from this group because he was an undrafted goalie for the Chicago Blackhawks, not the San Jose Sharks.

Eight teams elected to trade for their starting goaltender.

The remaining thirteen teams drafted their starting goaltender, two of which have won the Stanley Cup (Marc-Andre Fleury with Pittsburgh and Cam Ward with Carolina).  Excluding Steve Mason of the Columbus Blue Jackets, who was actually a Vezina trophy goaltender at one point of his career, this list includes the majority of the goaltenders often granted “elite” status.

That’s not to suggest that signing a free agent or trading for one doesn’t work, but many of these typically fall under the “stopgap” category versus franchise player.  Ray Emery and Michael Leighton are perfect examples, who each saw their future with the Flyers dissolve following substantial injuries.

The failure to address goaltending within the system is ultimately why they had to resort to gambling and overpaying in free agency.

Of the eight goaltenders drafted by the Flyers since 2005, only Jakub Kovar (2006 4th round pick) and Brad Phillips (2007 7th round pick) are still with the organization in some capacity.  Phillips is a goaltender for the Flyers’ ECHL affiliate, the Trenton Titans, while Kovar’s rights are still in the Flyers’ possession thanks to the Czech Republic’s lack of a transfer agreement with the NHL.

According to Teemu of Broad Street Hockey, Kovar has an impressive 2.01 goals-against-average and 0.935 save percentage in 17 games played with HC České Budějovice of the Czech Extraliga.  To the best of my knowledge, there have never been any serious discussions about Kovar ever coming to North America.

The other goaltending prospects were either disappointments or were let go before they had time to properly develop.

Former Phantoms netminder Nicola Riopel struggled in the AHL over the last two years, leading to his early departure, while Morrison, DeSerres, Michael Dupont and Joakim Eriksson were let go before making it to the Phantoms.  Only Jeremy Duchesne actually played for the Flyers, relieving Brian Boucher in April 2010 as one of the goalies on the merry-go-round from hell that season. He is currently playing for the Saint-Georges CRS Express of the Ligue Nord-Américaine de Hockey, a semi-pro league in Quebec.

Should the Flyers hold onto their first round pick this year and finish in the top ten (meaning they draft somewhere between #21 and #30 overall), they would be wise to restock the system with a goaltender.  Niko Hovinen is the only goalie in the system signed beyond this season and having fallback measures would be keen in the event that the Bryzgalov signing doesn’t pan out.