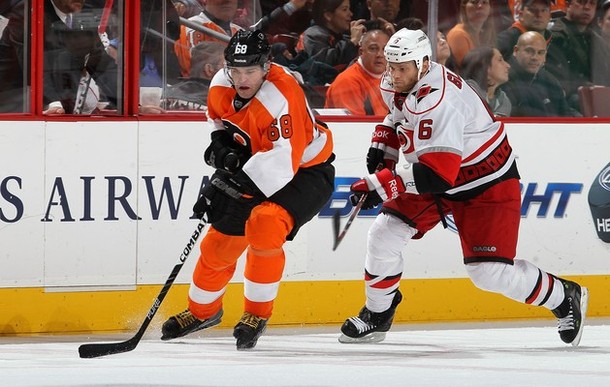 Honestly, I don’t have an issue with the rules in baseball or basketball. Baseball is a game of judgment, and regardless of how many bad calls umpires can make, we would not know how bad they were if it were not for technology. In fact, I think it’s a little unfair for the umpires to constantly be on the hotseat for a job that’s been
as much about judgment than any other professional sport. With advanced in media technology, we now know how

bad umpires can be, and I think it’s the umpires’ attitudes that make us more ferocious toward them than any other referee in any other sport. Umpires are taught to make calls with emphasis and stand by their decision and not to be second-guessed.

None of this was more evident then last season when Jim Joyce cost Armando Galarraga a perfect game for the Detroit Tigers, a week after Roy Halladay pitched a perfect game in Miami for the Phillies. Joyce
went out of his way to look at the replay, apologized to Galarraga, and cried because of his mistake. Because of that, Jim Joyce wasn’t the victim of venom from the team or the fans. Galarraga even presented the lineup card to the home plate umpire, which was to be Jim Joyce, the next night.

That was refreshing for me to see. Umpires are human, but they’re the most arrogant of the referees in their respective sport. That brings a question to the forefront: do the newly re-enforced head shot rules in the NHL and NFL shine a bigger light to the officials? Or does it bring light to the fact that the professional sports that encourage
violent hits are now going soft? Let’s examine the theory.

The new rules have yet to be universally understood by all fans of the NHL and NFL. In the NHL, hits to the head are illegal, a definitely penalty and fine, and possibly could lead to suspensions. With the outburst of concussions in professional sports these days, the professional sports leagues don’t want to take any chances. They also don’t want to give off the impression that they’re turning a blind eye to the former NHL players that have had troubles leading normal lives because of the head injuries sustained during their playing careers. The deaths of Derek Boogard, Rick Rypien, and Wade Belak this past summer, all enforcers, bring light to a lifestyle in professional
sports that some players may not be to fond of.

On HBO’s Real Sports last week, they took a look at the link between NHL enforcers and depression. Jim Thomson explained his problems dealing with the fighting, and then gave a chilling detail of an exchange between
himself and Belak, just months before he hung himself: “I was this fun-loving boy who loved hockey, and all of a sudden I became a monster,” said Jim Thomson, a former enforcer with Los Angeles. A frequent fighter, Thomson racked up 162 penalty minutes in just 45 games with the Kings in the 1991-92 season. “I was afraid, 24-7. I was shivering every night, curled up in a ball, knowing I had to go in and fight.” Thomson recalls a conversation he had with Belak: “I asked him, ‘Do you like (fighting).” Thomson said Belak responded, “I hate it.”
Enforcers believe they have a job for one thing and one thing only, and that’s to protect the team’s superstars. If they are unable to, they would be out of a job as there is a line of players ready to step in and assume the role.

The role of the enforcer exists because anyone who can ice skate doesn’t exactly make for a good hockey player. If there were more natural goal scorers, the role of the enforcer might not exist. There are also players who are stars, like Alexander Ovechkin, who can be their own enforcer. The enforcer exists because there are simply not
enough good hockey players in the world that can make a NHL team. That certainly has a lot to do with coaching, as coaches would love to have at least one enforcer on a team to keep the other team’s players in check when lining up one of their team’s stars to hit. It makes sense. But would there really be a role for enforcers if there was
enough hockey talent in the world?

Maybe the Flyers started the era, as the Broad Street Bullies who were a force to be reckoned with and physically dominated opponents in the 1970’s and 1980’s. But that has nothing to do with a guy lining up
someone’s head with their own elbow. Chris Pronger laid out St. Louis Blues captain David Backes with a clean shoulder-to-shoulder check, and Backes’s head hit the ice because of the force. Zac Rinaldo laid
out Kings superstar defenseman Drew Doughty with a clean hit, and Doughty suffered a head injury, because he wasn’t expecting it. Not expecting a hit will likely have just as much consequence to a head injury as someone elbowing a guy on purpose.

The NFL has now cracked down on hits to defenseless receivers and hits to the head to quarterbacks. It’s no more a defensive league, but an offensive league. And that’s where the shades of gray come in. We all grew up with tough, hard-nose football that was man vs. man and players played on broken feet, legs, etc. What we have now is a watered-down NFL that takes the players (really, the offensive star position players) health into account. Defenses are not tough anymore. Nobody fears a defense in this age because the NFL wants more scoring to a more exciting product on the field. As a business decision, I can’t blame them. The NFL is constantly proving to be the premiere professional sports league in America, if not the world. But sometimes when I’m sitting there watching a game and see a yellow flag thrown out of nowhere to which used to be a great hit back in 2000, I
throw my arms up in the air and say, “This just is not football anymore.” And it’s not. Could it become flag football in a matter of years? Definitely not. But that’s what most fans who watch football still think is happening. Hitting isn’t encouraged anymore. What’s football without hitting?

Much like what’s hockey without hitting? Could you sit through a KHL game that has no hitting whatsoever? I don’t think I could. Hockey and football never made me want to go out and kill someone. I understand violence is part of the game, and players assume that risk when they play. But at this point, I think the professional sports leagues are going a little too far to protect these players, and the product on the ice and on the field is deteriorating.