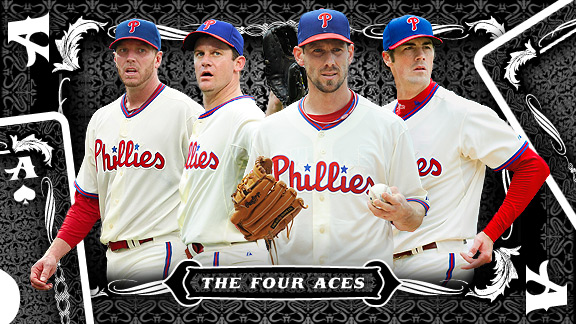 The St. Louis Cardinals once again proved to the sports world that championships aren’t won on paper and if you have momentum going into October you can beat anyone. They definitely caught a few breaks along the way to

glory but that comes with the territory of being a championship ball club. The Phillies had no luck in any way this October but on paper they still are without a doubt the best team in baseball. With the season now officially over I took a few moments to reflect back on the Phillies season and think about the future as well and began asking myself, is this team missing out on an opportunity to be a baseball dynasty?

During the regular season this team performed up to my expectations. The pitching dominated and carried them all season. The bats had their moments of glory but for the most part didn’t live up to the hype. Bottom line this team underachieved in a major way once October hit and that includes the pitching. Cliff Lee allowing a 4-run lead to slip away in Game 2 of the NLDS is inexcusable and he should be taking more heat for it. The bats didn’t operate when they were needed to the most and that’s another issue that should be addressed. This team needs to become more clutch in big games. After this season I have no trust in this lineup going forward when we are put in an elimination situation. Between game 6 of the NLCS last season and game 5 of this year’s NLDS I have no reason to believe we can put runs on the board when we get into these games.

The Phillies are beginning to look like a team on the downside. In the past three seasons since the 08 title they’ve been eliminated a round earlier then the year before and interestingly all by the eventual champs. By the way the Flyers the past two seasons and the Eagles last year also were eliminated by the eventual champs which seems to be an interesting trend going on in town. The Phillies exiting a round earlier than the previous year is a concern though. This team will be in the playoffs again next season because they still have a dominant rotation even without Oswalt. Also I don’t see any of the other NL East teams catching up to the Phillies just yet but the Braves are indeed gaining ground.

The past two seasons the Phillies were the best team in the National League and should have been in the World Series to have an opportunity to compete for another championship. These are missed opportunities that we will look back on one day. This team isn’t getting any younger and the window of opportunity is getting smaller with each passing season. They need to begin the process of getting younger but also maintaining the same level of play which will be a challenge. I believe after another two or three seasons you will see this team over-taken in the division unless they can replenish existing talent with young talent that can compete at a high level.

Although the Phillies captured the title in 08 which was very impressive and satisfying to the fan base we are missing out on the chance to be a legitimate baseball dynasty. At some point during the past three seasons the team should have captured another World Series or two. Going forward I see it as a challenge for this team to capture another title unless the bats can become clutch. If we continue to make the playoffs over the next few seasons and not win another World Series I’ll view this team as nothing more than another version of the 91-05 Atlanta Braves teams. During that span the Braves went to the post season every year and captured only one World Series in 95.

No matter how much longer this streak of playoff appearances will go for it won’t be solidified in baseball history as a dynasty unless another World Series or two can be won and this team is blowing opportunities to do that. I hope I’m wrong but the way recent seasons have ended since 08 shows me this team is aging and declining. Hopefully the players realize the window of opportunity won’t be open forever and the time to put a stamp on baseball history is now.

Top Ten Reasons Why I Hate The Cowboys