Top Ten Reasons Why I Hate The Cowboys 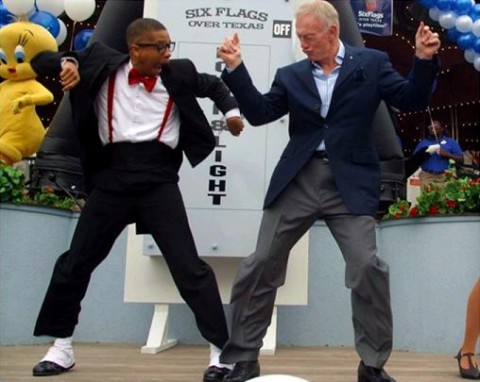 Everything was going good on Friday. We were having my daughter’s birthday party and I was looking forward to the Eagles- Cowgirls this weekend. I was feeling good. Then my infamous co-worker walks in who is a… Wait for it..Cowboys and a Eagles fan. I know, I did not think it was possible either. There have been many times when I want to verbally let him have it.

He tells me all the time it’s okay because he roots for the Eagles first and Cowboys second. Yeah, that makes it all better. The dude is a total “Fraud”. So thanks to this “Fraud” here is the 10 reasons why I hate the Cowboys.

10. Rob Ryan. First of all his dad probably smacked him in the back of the head a few times for going to Dallas. Second, he tries to be his father but can’t pull it off. Seriously bro, you are not as cool as your pop so just keep your Fat-Mouth shut!

9. Tony “Lebron James” Romo. He has been overhyped from the beginning just because he plays for Dallas. He has won a total “1” playoff game that is it. I must admit, I enjoy watching his 4th quarters though.

8. You know that almost every Cowgirls fan is a Yankee fan also. That is all you need to know about a person right there. They just like those teams because they think it is cool. Hey, how about jumping into oncoming traffic, I heard that’s pretty cool.

7. When the Cowboys lose their fans are nowhere to be found. But if they win they always seem to track you down. FRAUDS. I love that word.

6. The Star. Man, I hate that symbol. We should sign T.O again for the way he stood over the star when he scored.

4. Deion “I never got my jersey dirty” Sanders. Listen, I know he is probably the best corner ever but the guy could not tackle you or me. He always tried to look so “Pretty” out their. Man, I hate that guy.

3.Michael “I pushed off every time” Irvin. That is all he ever did was push-off every time. He actually stabbed one of his teammates with a fork a few times and Jerry Jones had to pay the guy off to keep him quiet. I am glad that I booed him when he got hurt at the Vet back in the day. Just sayin..

2. Jimmy Johnson. You can not think you have great hair when you have a comb-over bro. I am sorry, you can’t. I hate his famous saying “How about them Cowboys”.

1.Jerry Jones. The “all mighty” himself. You can tell that is what he thinks of himself. He thinks he is GM in which he is not. Builds a stadium that interferes with the play on the field. Still thinks they are “America’s team”. I thought you had to win something to be “America’s Team”? One playoff win in 15 years Jerry. Yup, your “America’s Team”.

Eagles Must Make A Decision About Graham Before Cowboys Game