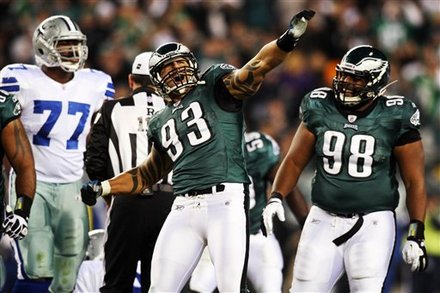 I was hesitant to say that the Eagles were facing a make it or break it situation heading into their 34-7 pasting of the division-rival Dallas Cowboys, but it was in fact a game that will hopefully set the tone for the rest of the season for the Birds.

After showing off an impressive defensive stand against the Redskins the Birds followed the trend in this one with back to back outstanding executions on the defensive side of the ball. They almost shut out one of the best offenses in the National Football League and that wasn’t an easy chore.

Coach Reid asserted that the tone was set on both sides of the ball by the line. The key this game from a defensive standpoint is the fact that they played 60 minutes. The men in midnight green held a 24-point lead heading into halftime, but the defense came up huge staying consistent throughout game and not letting it turn into another 49ers second-half disaster.

The first drive told the story. The Cowboys started out with great field position with the ball on their own 45-yard line. On that first drive the Eagles recorded two sacks with left defensive end Jason Babin getting to Tony Romo and right defensive end Trent Cole assisting. On third down, Trevor Laws came up with a big sack to force the Cowboys to punt.

The key to the sacks was the fact that the secondary forced Romo to hang onto the football. He didn’t have an

open receiver to throw to, so he had to pull the ball down and that’s when the guys upfront got to him.

The D-line accounted for four sacks in the game including two by Babin. The defensive end contributed to an overall defensive effort that gave up just under 130 yards through the air until Romo was able to connect with wide-out Laurent Robinson for a 4th quarter touchdown. Up until that point the D-line gave Romo almost no time to throw ball as he spent most of the game scrambling out of the pocket and rushing throws that just weren’t there.

Defensive end Trent Cole also returned to the lineup in this one after missing the two previous games. Cole made his presence known in this one registering a sack in the game as well as adding to the pressure inflicted on Romo.

The tandem of Cole and Babin is arguably the best 1-2 punch of defensive ends in the league.

“They both feed off of each other,” defensive coordinator Juan Castillo said. Feed off of each other is exactly what they did as the two combined for three sacks in the game. “I said earlier that there’s 100 percent, and then there’s Jason-Babin and Trent-Cole percent. They’re special. They’re trying to beat each other to see who has more sacks, it’s relentless. I think what happens is when one of them looks over at the other one, they give each other, if that’s possible to say, they give each other more energy.”

It is proven that when the former Cincinnati Bearcat is in the lineup that the defense produces a much higher output of quarterback hits. On the season the Eagles have a mere three sacks without Cole in the lineup. The end is a proven impact as soon as he steps on the field. With the return of Cole, along with a well-rested d-line following the bye week, defensive line coach Washburn had a versatile rotation of lineman to work with along with giving certain playmakers time to rest in the process.

With the defensive line setting the stage, the linebackers and secondary followed. While clogging up running lanes, Romo was forced to bring his team back into the game through the air. The QB had minimal luck in this regard as the corners blanketed Cowboys receivers holding wide-out Dez Bryant and all-pro tight end Jason Witten to a combined 7 receptions for 56 yards and no touchdowns.

Containment of the tight ends and running backs have been the Achilles heel on the Eagles defense all season, but those positions were not at all a factor in the game as the Birds executed to near perfection.

Cornerback Nhamdi Asoumugha called the performance of the defense a team effort that was consisted of all the defensive players doing their jobs. With the overwhelming pass rush put on by the front four, Asomugha and his secondary-mates were able to mix up the coverages, then lock down the receivers they were covering. The Birds secondary played both zone and man-to-man defenses which kept Tony Romo off balanced in his reads.

resulted in the corner recording a pick in the game. He took yet another step forward in the progression that Castillo has been making in matching personnel to the coverages and defensive fronts.

Asomugha along with fellow Pro Bowl cornerback Asante Samuel have been in talks with Castillo in their progression to play coverages which allow them to best use their skills. Asomugha understands that it is Castillo’s first time in this position as defensive coordinator and that there is a lot of pressure on him in balancing the attributes of major playmakers such as Jason Babin on the lin,e as well as the expertise of corners himself, Samuel and Dominique Rogers-Cromartie in the secondary.

The bottom-line for the players and coaches alike is to put a winning formula on the field. With both sides having this in mindset going into each week as they prepare for each opponent, they will be able to better put together a defensive game plan each week that gets the job done.

The Eagles Offense Must Keep Its Focus

My Thoughts About The BCS Contenders

Dear Babbin,
i was wrong about you. Please forgive me. I thought you were small. i thought you were one of those AR guys that sounds like a good idea but cant push. I didnt watch you much last year… i should have. im so glad you are here….

Stevo – Bravo! You remember all the ‘he was a one year wonder’ sayers?

Babin is a late bloomer and will play until he’s 45 years old..

remember them schiller??? it waas ME!!! im that guy. I didnt know…. honestly…. i was wrong. Im ready to eat crow on the Juan thing too…. i reeeaaalllllyyyy hope im dead wrong about him. Pman was right when he said “give juan the year”.

Yeah, I heard you Stevo, but there were many others too. It was the same crowd that says Graham is a bust. It’s foolish to jump to conclusions but it’s commonplace amongst philly fans. That’s a shame because all it takes is some common sense and patience to overcome the urge to jump to conclusions.

Who would have thought?

The player to give us the push opposite Cole was on our team playing well mind you…..

And what did we do?

We let him sign elsewhere then passed up Earl Thomas to draft Graham, moved up with an extra pick to get him.

So, those in the talent evaluations thought Graham was a better DE than Babin.

So, after Graham who was injured could not unseat the aging J. Parker before his injury ….

We sign the guy who should have been resigned in the 1st place.

It’s obvious Babin is our starting DE on that side for the forseeable future, so we actually traded up and bypassed a stud Safety for a rotational player in Graham at best.

When will we stop taking steps forward only to take 2 steps back?

schill- i did not nor would say graham is a bust. wayyyyy too early. Hes a rook. I think he will do weel under washburn.

songs- save it. Babbin does well in wide 9. he did not work out with the crap coach we had before.

Songs – You actually don’t understand the meaning of ‘hindsight is 20/20’ do you? I’m convinced you don’t. You’re a total hypocrite – you were right there with Stevo in calling Babin a bum. And now you’re saying the team was foolish for letting him go because clearly, he’s no bum. You’re an ignorant hypocrite, and I’m not saying that to be a jerk or be juvenille with name calling, I’m just stating the truth.

Stevo – yeah, I know you’re usally pretty reasonable. We’re all human, and you just slipped up there. I slip up too. But it’s a good reminder that calling anything a 1 year wonder before the 2nd relevant year begins is foolish.

Songs- give me a break. I still say graham and allen will do well here. just give em time.

Im not a huge andy fan either songs but…. you have to give the man credit when he nails it if you are going to slap him when he blows it…….example…

if Graham didnt blow his knee out we would not have landed babbin.

if the D style of blitz blitz friggin blitz would have worked last year, we would not have seen the birds bring in a Dline coach that has tuned these guys loose THIS year.

Im glad trevor Lindley was drafted because he means we needed to get nnamdi.

You are fine to bring up the D players they missed…. and you are right about many of them. BUT…. what about the O players? Djax, Macklin, Shady??
i still say….. this D is loaded with talent and they will get even better. The F.O. and Andy…. did a good job of getting us some help.

im not sold on this LB core yet… and i want to see more gameplans like sunday before i praise them tooooo much BUT…..put that hate on ice this week man… we just killed the cowboys!!!

ok schill- i will explain myself though. I did not expect the birds to change their D style of play as much as they have. I have to give them credit because…. going from blitzing the house for 15 or so years to trusting your line to get the job done is huge. I felt that in order to do this they needed a bigger guy to help free cole. I honestly cant believe its working.

I hear you Stevo. I’m not saying I knew it would be this effective or had any more accurate expectations than you did. I just was towing my line – I don’t support assumptions/predicting the future with confidence.

btw…. i was saying more that the birds would not bring babbin back.. not that he would be bad. I just didnt think they would do it. so maybe im NOT that guy that you were talking about. As far as im concerned…. once you dawn the green you are my guy until you blow it. I supported Kolb from the moment they traded away my guy until he wet the bed against GB.