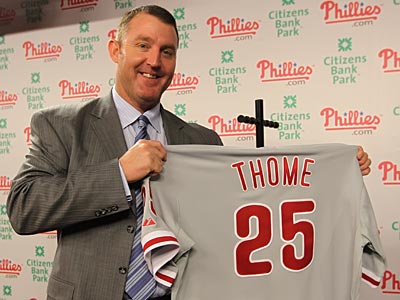 I grew up in era of Phils baseball when nobody cared about baseball. The cool thing to do was go to the game just to run around the 700 level. Mike Schmidt was retired. Remembered Von Hayes just a tad. Well, that is actually a good thing. You had Steve Jeltz and Tommie Herr turning double plays.

Now that was fun. Bruce Ruffin and Pat Combs. Remember when Combs was a late callup and went 4-0 with 2.09 era. We all thought he was the second coming of “LEFTY”. I thought he was. What? I was ten years old. Good old Dickie Thon and my favorite Randy Ready. Man, I loved Rany Ready. Still don’t know why. Then I had a little glimpse with the “Lightning in a Bottle” the 1993 team.

With Dutch, Dykstra, Hollins, Schilling and Terry Mo. That team was so much fun to watch. I wonder what Dykstra’s up to now? I am glad that Dutch does not see ghosts anymore. They fell apart way too quick. Than began the era of Greg Jefferies and Desi Relaford. And how can I forget Ricky Otero. Man, I almost missed him.

It got a little better with the arrival of Scott Rolen. I know he is public enemy number one around here but he was a helluva player here. With Rolen then came along Abreu, Leiby and some little guy name Jimmy Rollins. Wait! How in the Hell did I forget about Danny Tartabull. The big acquisition played a total of three games for the Phils before fouling a ball off his foot and was done for the year. Awesome.

Things were starting to turn around with Bowa back in town. Even though he looked like he wanted to kill someone every night out there. I enjoyed it. Then our favorite other son Pat the Bat arrived on the scene. You can say whipping boy for some.

Then there was rumor that the Phils were going to get a new stadium. Then the “Bank” was getting built. There was still not that much buzz. This still was the same old small market mined Phils. With Rolen gone, Schilling gone. Phils had decent young core with Rollins, Abreu and Pat but not alot buzz. Enter Thome. I remembering thinking why in the world would Thome come here? Not happening. He came here to visit shaking everyone’s hand he meet even getting out of his car to talk to the construction workers. Then just like that he is a Phillie.

The city was buzzing like crazy. He was the one who brought that feeling that the Phils could win. He was the one who started to put butts back the seats at the Vet. He set expectations. He brought relevance back to the team that had none for years. Really since the early 80’s.

Did he bring a championship? No. Though he did something pretty close to it. He change the culture of this franchise that was going nowhere. He had us believing that players do want to come here. That maybe we do actually have a chance. For me that’s is all I ever wanted from a team that I loved. I wanted to just to be loved back. That’s all. Thome did that for me. Nice to have you back Jimmy! Now, let’s get that ring back!

Nice story Joe and I agree with you that signing Thome the 1st time was one of the Turning points and gettting that “Winning Mentality” back for the Phillies and helped them turn the corner about becoming an winning organization that can compete to win every season..
I do question on what he brings to the plate now unless Howard is out for a lot longer than we know (I think Howard is out at least to the All-Star Break in July) due to his lack of playing in the field.. The Phils already have one of oldest,least athletic IF’s and by adding Thome, who has played very little in the field over the last 5 years and could be a real liability. Theres no doubt that Thome can still hit and be very effective with 20-25 At-Bats a week, what I question is he going to get that many At-Bats with the Phils and in order to do so, he will have to play 4-5 games a week at 1B.. If he is used strictly as a Pinch-HItter and only gets 5-6 Bats a Week, I am not so sure how effective he can be.. Being a Pinch-Hitter is a big adjustment for players that are used to be every day players.. most of them fail due to not getting as many at bats to keep the eyes,hands and swinging mechanisms in place.. What usually happens is that players know they are only get 1 At Bat here or there and try to do too much and overswing and end up with a bad At-Bat.. I am not saying this will happen to Thome, but I am saying you just can put a productive,almost every-day players used to getting 20-30 At Bats a week to get into t rhythm and stay sharp and then expect the player to give you good At-Bats when only being used 5-6 times a week.. but I guess if anyone can make that transition, Jim Thome can…
Playing 1B is lot more to it than just catch a ball in the dirt, It’s holding baserunners, making the right plays on bunts, preventing the doubles down the line, etc,etc.. and Thome was an average 1B to begin with during his prime, no 5-6 years later, can he still perform at 1B without hurting the team in these difference areas…

what was thome’s BA last yr?