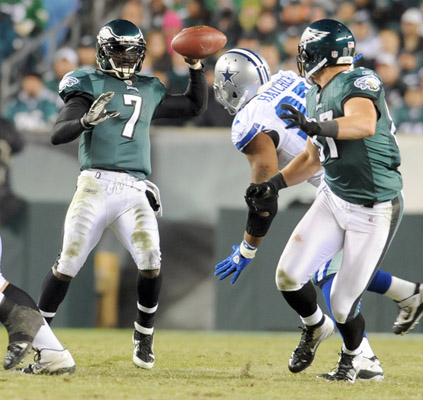 If the Eagles don’t beat the Chicago Bears tomorrow night at Lincoln Financial Field, the win over the Dallas Cowboys won’t mean anything. They need this game over the Bears just as much as they needed the win over the Cowboys.

Their slow start has put them into a position where they must go on a run for quite a while. It starts with the Bears then includes Kevin Kolb and the one-win Arizona Cardinals. You know that they’ve got to beat the division-leading New York Giants in week 11 to have any chance of winning the division and making the playoffs.

To reach their goal of making the playoffs, the Eagles will probably need to win 10 games. That will mean going 7-2 the rest of the way, so there won’t be much room for error.

After falling to 1-4 on the season, the Eagles have improved the condition of their season from life support to stable condition. The Birds improved to 3-4 on the season after dismantling the rival Cowboys in front of a ruckus Sunday night crowd at Lincoln Financial Field.

Going into last Sunday night’s showdown, it seemed as if the storylines were more about the coaches of each team rather than the players. Andy Reid of course entered the game a perfect 12-0 after a bye week in the regular season. As to how Andy always seems to find a way to win after the bye, “I have no idea,” said Reid at his post-game press conference.

the Eagles were the “all hype team” and that the ‘Boys were going to “kick their [explicative] when we play them.”

At the end of the night the final score would show the ‘all hype’ team make Ryan’s defense look non-existent and his statement look down right foolish as Ryan admitted post-game that it his fault they lost and that he didn’t put his players in a good position.

Early in the season, the Eagles problems were well-documented. They turned the ball over too much, their red-zone efficiency was bad both on offense and defense, the wide-9 defense was creating too many running lanes, and the offensive line was not adequately protecting Michael Vick.

Now after looking scary good on Sunday night, many analysts are saying that the Eagles will be the team that will come out of the NFC East. Some have even gone as far to say that the Birds provide the NFC’s best matchup to knock off the defending Super Bowl

The Eagles are not out of the hole yet. Yes, the Eagles have won two games in row, yes; they have looked better in recent weeks and have seemed to figure out at least some of the problems that plagued them early in the season. However it is important to realize that the Eagles are 3-4 and are still looking up to a 5-2 Giants team. Granted the Giants are about to face a brutal stretch in their schedule. The Birds still have work to do if they’re going to reel in the G-men. As we already found out, it’s not just going to be given to the Eagles they are going to have to battle for it.

The Eagles have another crucial primetime matchup at the Linc this week, this time a Monday night showdown with the 4-3 Chicago Bears, who are currently in a fight for their playoff lives as well. If the Eagles are able to put together another primetime thrashing the ‘all hype team’ could be on the verge of restoring, dare I say, the Vince Young proclaimed, “dream team.”