The Keywords for This Eagles Season Are ‘Just Short’ 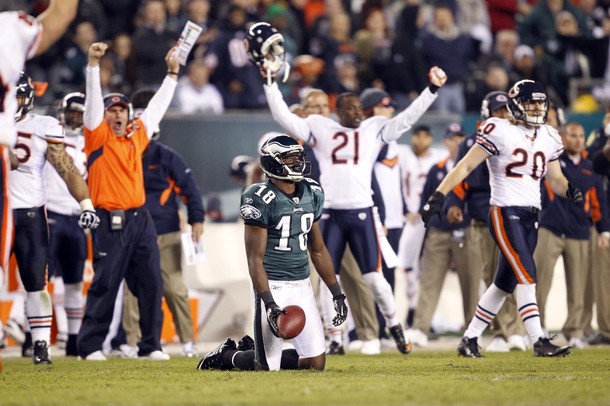 Last week, during Halloween weekend, a 2-4 Philadelphia Eagles team pleasantly surprised the Delaware Valley with a 34-7 victory over the rival Dallas Cowboys.

After the game, I wondered if the Birds dressed up as a playoff team for the occasion or did the Eagles finally unmask their true identity.  Last night’s game against the Chicago Bears has fans thinking about the former.

Mathematically, the Eagles can still make the playoffs.  The problem is their intangibles.  They have yet to show they have the mental toughness to overcome the uphill battle ahead of them.

While he’s certainly responsible for ‘Putting players in position to make plays’, this isn’t entirely head coach Andy Reid’s fault.  Plays have to be executed by players.

So far there has been one lesson learned about the 2011 Eagles.  The price to acquire talent is very high, but the value of leadership is priceless.

It could take quite some time to list the names of former Birds who would’ve addressed the internal problems this team has a while ago.  The reality is none of those players are here anymore.  It’s well past time for someone new to step up.

Who is that leader?  Naturally, it should be QB Michael Vick.  The problem is he’s epitomized inconsistency.  His interception in the red zone was one of the most ill advised throws I’ve seen in recent memory.

Could it be Cullen Jenkins?  He’s a veteran from a Super Bowl winning organization, but still kind of ‘the new guy’.

Nnamdi Asoumugha?  Jason Avant? Jeremy Maclin?  They are three talented, team-oriented players.  But none of them seem to have the mentality to get in a teammates face when needed.

Asante Samuel??  DeSean Jackson??  Two very vocal guys who get louder the more productive they are.  The less they produce, the more likely they are to get frustrated.  Not a definition of a leader.

By the way DeSean, your team ties the game after being down 10-0.  They force the Bears to punt late in the first half AND you get the ball first to start the third quarter.  Your squad had all of the momentum.  The last you could afford to do was fumble inside the ten yard line.  Sorry, I had to vent….

So…..Who is the guy who can lead the Eagles out of this hole?  Unfortunately, they are not currently part of the organization.  They’re not on the coaching staff or the active roster.

If they were, the primary issues that have this team sitting at 3-5 would have been addressed by now.  Turnovers, penalties, third down conversions and blowing fourth quarter leads.  Winning teams don’t allow these problems to occur on a consistent basis the way this Eagles team has.

Looking at the remainder of the schedule, the Birds look like a 6-10 (maybe 5-11) team.  If that happens, you can look at Maclin’s fourth down catch to end the game as an example.  They just kept coming up short.

Juan Castillo’s Stars Let Him Down On Monday Night

Cowboys victory was good balanced football….mcCoy 30 rushes Vick 28 passes(21-28) good job……when u throw 40 passes it puts too much on qb..

AS Reid heads toward 15 seasons, i think linebacker is slowly fading from by vocabulary……LINEBACKERS???????/ what are they? who cares we don’t need them..

Haran, they have no mental, nor physical toughness. All of the $$$ they unwisely spent, is disgraceful. How are those, Vince Young, Brown & Smith signings working out for you!? How would that $$$ look now if it was invested in the LB, safety & O-line corps. Stupid SOB’s.
Dire needs & priorities this off season-
1- Reid, his cronies, Rosebud, Asante, Patterson, DJax must go.
2- LB, Safety, O-line, DT.
3- Get a real talent evaluator & GM.

One thing I REFUSE to do is CRITICIZE any signings. Theres not 1 person anywhere in Eagles nation that bitched about any signings. I was on board with everything they did so I cant criticize now,

Its funny how we keep talking about the LB and safties. How about DT? WTF does Jenkins and Patterson do? Maybe the LBs would be better if we actually had DT that could free them up. Want to start cutting recievers? Maclin gets a free pass every week. How many drops a game does he have? How many fumbles? Can he get deep once in a while. Im trying to remember the last game breaking great catch he has ever made? Lets not make Maclin out to be this WOW player. He is a very avg 2nd reciever. Hell he has Jackson clearing out for him all game long he should catch 100 balls..

The Eagles definitely miss their best run stuffer in DT A Dixon..
They also should have Drafted DT M Wilkerson in the 1st Round, as I suggested, to sure up the middle of the DL for the next 10 years..
I also have suggested that C Jenkins would be better utilized at DE (on Rushing Downs and against strong running teams and then have Babin come in strivtly on passing downs… This is what GM Paulman would have done..

As far as the Eagles Receivers, which I have stated for 2 years, are average and not an elite group in the NFL in my opinion. They are no doubt speedy, but as a group, they are average, they can’t or won’t catch a ball over the middle, they can’t seperate from physical CB’s and agressive Secondaries and are non effective in the Red-Zone and are not good on breaking off routes to get into open space to help a scrambling Vick.. It’s very disappointing in their lack of development..

Albert Haynesworth is out there. HES ONLY 30 YEARS OLD, and was his hungriest and most successful playing under washburn. That would be some story if he came here and helped sure up this run defense.. Him and cullen jenkins would make for a dominant tandum… He actually hasnt been having a bad year in new england he has a bunch of QB hurries, no sacks though. He doesnt fit that scheme. Washburn knows exactly how to use him. The eagles need to sign this man BADLY. Im not being extra im just being honest. His career would be rejuvanated if he comes here.. The washburn effect.. so i see the birds signing him either off waivers or wait until after 4pm today when he ll be a free agent… his 1st choice was and still is to come here to play under washburn.. Now he may get his chance..

JH, the last thing this team needs in the locker room is that fat ass…This team needs leaders….To me thats the biggest issue with this team by far…How many times have they came out flat or uninterested this year? on top of that you have every team they play wanting to beat them badly like their the SB champions or something…There is no leadership man. It seems like were going to have a top 10 pick this year so hopefully the guy picked is somebody who can change the girly culture on this team.

The only spark Haynesworth would provide is for the BBQ grill. He would love to eat and get paid on a team in disaray. He would show up for more money and give no effort.

I was hoping he would be signed in the off season, boy was I wrong.

Good post Pman.
Why the hell isn’t the front 4 Cole, Dixon, Patterson and Jenkins more often or on running downs.

The staff is so quick to bring small DE’s to play DT on passing downs, but refuse to beef up the line on running situations. Here is a simple truth; ” Good big guys beat good small guys”. Speed is a major aspect of the game, but size matters. I think my wife lives by that motto.

He doesnt fit those schemes. Hes a monster in the wide9. If he was on the lions hed have 10 sacks already, if he was her hed have 7 or 8.. You guys gotta understand hes only 30 YEARS OLD. Hes not done guys.. Hes a different player under washburn…

Haynesworth is done JH,
Just file him away as another player who lost his heart and passion for the game once he made the big bucks and just really didn’t care if he played at a high level anymore or not… (put him in the same file as Shawn Andrews,Stacey Andrews, Jevaon Kearse, and possibly Vince Young)

I actually went on record as saying that the Eagles needed to retain Stewart Bradley or Quinton Mikell because without them the defense had no leadership. Trent Cole in an introvert and Assante is a me guy. The other two guys were the leaders on this defense which now has no leaders. I felt that looking at the Eagles LB picture AFTER the draft that they needed to keep Bradley AND go after a free agent. They did neither and it has cost them in LB talent and leadership. Same goes for safety which they did not address. Instead relying on two second year guys with questionable talent and a slow rookie that didn’t play big-time college ball. The money spent on Steve Smith, Ronnie Brown and Vince Young which was a complete waste could have kept both of these guys here. The defense would have been better. I know Bradley never lived up to our expectations, but he has got to be better than Fokou and Mikell is better than any safety on this team and the leadership they would have provided would have indeed been priceless.

LB Stewart Bradley is not even a full-time Start for the Cardinals who have plenty of Defensive issues as well.. Bradley has a total 18 Tackles this Season and only 5 Tackles total in the last 5 games…
S Q Mickell is the one who should have been kept and could have been the glue to keep this Secondary intact and help the young Safeties and new CB’s assimilate to the Eagles Culture/Locker room etc,etc…
I am going to go on record to state that 2nd Round Pick J Jarrett is not only, not an NFL Caliber player, but that he will be out of the NFL completely by the 2013 Season . He’s too small, too slow and has very limited coverage skills, How he got drafted as the #55 Overall Selection in the NFL Draft (in the 2nd Round) is ridiculous..A huge miss in the 2nd Round by Roseman and Coach AR… (not to be hard on a good local kid from Temple, but he looked like a boy playing among men out there..)