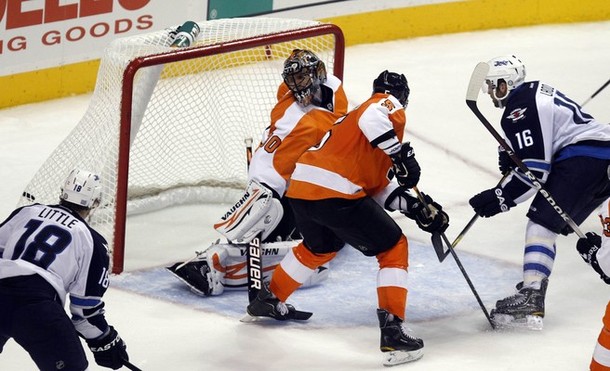 The Flyers announced today that they have officially signed defenseman Braydon Coburn to a four-year, $18 million contract extension.  The signing was first broken by the twitter account “@NHLFreeagents” last night, but was confirmed by Tim Panaccio of CSNPhilly today.

Coburn is one of two defensemen that was set to be an unrestricted free agent next July.  I analyzed the free agent defenseman market in August, which placed his value somewhere between $4.0 and $4.5 million based on the contracts offerred to other free agent defensemen at that time.  The contract and years are at the high end for what Coburn could have expected, but are not out of line.

The signing suggests that Matt Carle, who is the other defenseman heading towards free agency next July, may be the odd man out in the Flyers’ future.

One option is to keep Carle for this season and hope that his skills will help put the Flyers over the top in terms of defensive depth by the time the playoffs begin.  The second option is to trade him before March to try and net some value for him, rather than let him walk for free.  The Pittsburgh Penguins were able to net offensive juggernaut James Neal from the Dallas Stars last season in exchange for “top four” defenseman Alex Goligoski, so perhaps a player like Linus Omark or Vinny Prospal could be brought in from the Edmonton Oilers or the Columbus Blue Jackets if desired.

The third option is that Paul Holmgren continues to work his magic throughout this season and next summer, finding a way to keep everybody through unpredictable trades.

Penn State President Out Today, Joe Paterno Should Go With Him