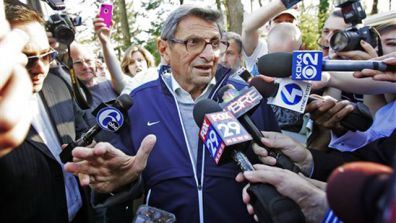 “I wish I had done more”. It seems that Penn State head coach Joe Paterno has started to see his negligence more clearly. The fact that he knew about his defensive coordinator Jerry Sandusky having molested a ten-year old and didn’t make sure that this was reported to the police was not enough.

The fact that Sandusky wasn’t in jail and was still involved with hundreds of children on a daily basis and Paterno knew about it is disgraceful. The fact that he still had keys to the Penn State sports facilities up until this past weekend is ridiculous.

“I am absolutely devastated by the developments in this case,” Paterno said in a statement that Fox News obtained. “I grieve for the children and their families, and I pray for their comfort and relief.”

“It is one of the great sorrows of my life,” Paterno said. “With the benefit of hindsight, I wish I had done more.”