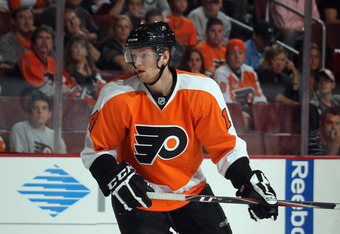 When the Philadelphia Flyers traded Jeff Carter to the Columbus Blue Jackets, most people weren’t surprised since rumors were flying weeks before the trade took place. It looks like the orange and black have gotten the better end of the deal.

Carter has only played in five games for the Blue Jackets and has no goals. He has three total points and they were all assists. He is currently out with a broken foot. Before the injury, he was averaging about 20 minutes per game.

The Blue Jackets went out and made some major changes in the offseason and most people picked them to be a playoff contender. They look more like a minor league hockey team and that was evident in their nine to two loss to the Flyers over the weekend. The Fly Guys led five to nothing after the first period and never looked back.

Jake Voracek had a tough start to the season so far, but facing his former team seemed to be just what the doctor ordered to break him out of his mini slump. He had a goal and two assists in the game against the Blue Jackets.

The winger has three goals to go along with five assists so far this season. His slow start could have been due to the fact that he didn’t have steady line mates with all the injuries that they Flyers were experiencing early in the season. His ice time has increased over the course of the season. He plays on the power play unit and is even in 14 games played for the orange and black.

The Blue Jackets also gave the Flyers their first round 2011 draft pick, which just happened to be the eighth overall pick in the draft. With that pick the orange and black decided to take center Sean Couturier. He made the team out of training camp and has impressed in his 14 games with the orange and black.

He has five goals, three assists and is a plus nine. The youngster also has a short-handed goal since his coach has the confidence to throw him out on the penalty kill with Max Talbot. He is mature for his age and is sound defensively. Couturier had two goals against the team that traded him away with their draft pick.

It is early in the season and in both of these youngsters careers, but time will tell who got the better end of the deal.