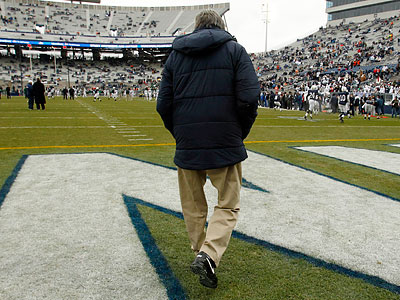 Two weeks ago was a great day for Joe Paterno at Penn State when he passed Eddie Robinson as the All-Time Division I victory leader. What a difference two weeks can make. Joe Paterno, the head coach at Penn State since 1966 on Wednesday evening

was fired by the Board of Trustees of the University. The Jerry Sandusky sex scandal has been totally spinning out of control and Paterno became another casualty of this big time scandal. Paterno had stated that this would be his last year as head coach
of Penn State but the public outcry had become too much for the university to ignore.

The Grand Jury findings earlier in the week forced the resignations of Penn State AD Tim Curley and Vice President Gary Schultz. The report stated that the two did not do enough and lied to the Grand Jury. The Board of Trustees along with the firing of head
coach Paterno, fired the University President Graham Spanier. The entire situation at Penn State has totally spiraled out of control.

The Grand Jury, spurred by a complaint made in 2009 by a 15-year old had been investigating assistant coach Jerry Sandusky for 18 months. There are so many questions that still need to be asked and answered by a lot of people. What did Joe Paterno know and when did he know? What did the Penn State administration know and when did they know it.

Also who needs to answer some questions is the Campus and State College Police forces. I just find it very hard to believe that neither one of these forces did not know of this in any way. I find that to be very concerning. Why was children protective services and public welfare not made aware of any of this?

The state of Pennsylvania requires this by law if any abuse involves a youth, it has to be reported. It seems that everyone just wanted

to keep this quite and keep it in house at Penn State. As this snow ball gets bigger and bigger the more of a cover up is apparent.

The 23 page Grand Jury report is very damaging and concerning. Reading this report over and over makes me so sick to my stomach. How in the world could anyone cover this up and try to hide this? All who knew should be fired and well investigated by authorities. Jerry Sandusky, the former coach at Penn State faces 40 counts of criminal charges. His contacts were with young kids who were troubled and were part of his charity group, Second Mile.

Sandusky was first accused in 1998 and he retired at Penn State. From 1998 to 2008 things got even more troubling and disturbing. Sandusky had complete access to the University and football facilities. According to the Grand Jury report Sandusky had numerous contacts and interactions with many youth children. He had them to his home, the Penn State football facility, and at numerous Penn State football games. Reading this report just makes you want to shake your head in disgust and makes you sick to your stomach. How could this have been going on for such a long period of time with a blind eye?

The wheels in State College, Pennsylvania keep spinning. This has become a complete story. Everyone needs to take responsibility here. Children were taking advantage of by a man who took his stature and reputation to a different level. Sandusky used his power and influence to hurt innocent children. The State of Pennsylvania, Centre County, and school administrators are to blame.

Why was this ignored for such a long time? Penn State football had total rein and the welfare of these children were never considered, which is sad and just dead wrong. All of the people in authority need to step up and take total responsibility here. There is a major black eye in Happy Valley. The final nail has been put into place. This scandal is going to be very hard for the university to overcome.