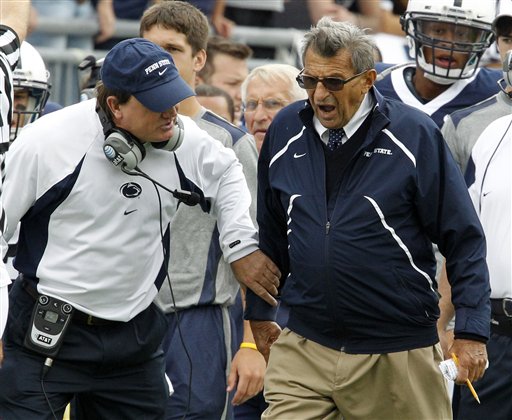 Somebody had better tell interim Penn State head coach Tom Bradley to abandon talking about Joe Paterno in the saintly manner. Bradley said Paterno “has meant more to me than anyone except my father.”

I’m concerned that Bradley said no comment when asked if he knew anything about Mike McQueary seeing Jerry Sandusky raping a ten-year old boy in the shower in 2002. If he knew about it, should he be the interim coach. I would be shocked if nobody else knew anything. I think they’re going to find out that many of them knew something was wrong but did nothing.

Bradley seems to still be brainwashed that Joe Pa is deity. When asked what he would expect to hear from Paterno if he goes over his house Bradley said the following.

“He’ll say, ‘Well, you just stay focused on the task at hand. You know what has to be done,’ ” Bradley said. “That’s what he will say to me. I know him well enough that he’ll say, ‘Take care of the kids. Take care of the team. I’m OK.’ That’s just the way he’s going to be. I don’t think he would want me to come over the house. He might kick me out anyway and say, ‘Get back and do what you’re supposed to do.’ ”

cared more about their reputation and stupid football program.

Bradley should refrain from talking about Joe Pa any more. He’s going to get swept out of Penn State after they play in their bowl game this season any way, but he still should end all the talk about Paterno.

I hear people calling 94-WIP and I read emails from Penn State fans, who want to talk about all the good that Joe did. I’m sorry to say that it’s all tarnished with all of the suffering of these kids who were abused at the hands of Jerry Sandusky.