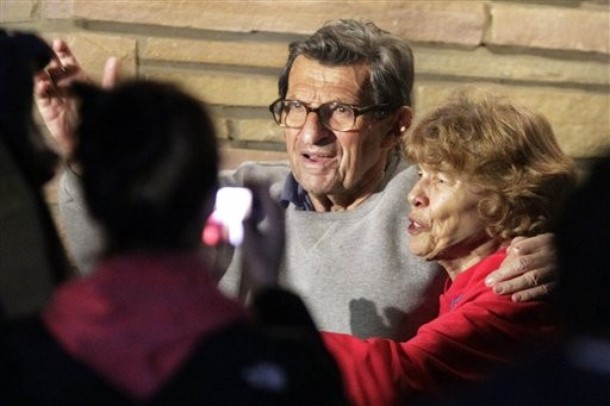 It was a day to remember at Penn State University on Wednesday November 9, 2011. The firing of head coach Joe Paterno was an event which won’t be easily forgotten.

Yesterday rumors started swirling around that Joe Paterno would be stepping down from his Head Coach position. The media went on a frenzy with the NFL even posting this as breaking news on their website.

Scott Paterno, one of his five children, quieted some of the reports by announcing on Twitter that the rumors were false.

He also told his followers that he was now working on setting up an off campus press conference since Joe Pa’s regular Tuesday conference was canceled by the school officials.

While the media swarmed Joe Pa as he tried to get in his car to go to practice, students took matters into their own hands. A Facebook event was created urging students to stand outside of his home to show their support. They did, and not only at his residence.

Throughout the night students gathered all over campus and downtown to show their support for Joe Pa, and to show that we as a

student body will not be defined by the actions of those above us.

Today, Joe Paterno announced that he was going to retire at the end of the season. In his statement he said, “My goals now are to keep my commitments to my players and staff and finish the season with dignity and determination.”

To those who feel he is selfish, you have no idea.

Joe Paterno is more than just football to the students, his players, and the community. He has raised around 13 million dollars to donate towards our library. Several millions of that were his own.

You would think a man with as much fame as him would live in mansion in a secluded, gated community that is miles from campus. I’ve seen his house on several occasions. It does not look like more than two stories. It is barely a five minute walk from campus.

At almost 85 years old, people have seen him walking by himself back home from practice. I see celebrities with people holding their umbrellas every day.

He is one of the least paid coaches in the Big Ten Conference. Our president has the highest salary of any president of a state

institution in the country.

So please tell me how this is selfish, especially when I have not listed everything he has done outside of football.

For those who say he is arrogant by telling the Board of Trustees what to do:

It’s one thing for him to say “You better not fire me because I’m the greatest coach there ever was,” but he DID not say that. He told them to not talk about him because they have other issues that are more important than him alone.

Yes, Joe Paterno could and should have done more, but at least he stepped up and admitted such.

But in all honesty, Joe Paterno is not what solely matters in this whole ordeal. He is only part of it, but is getting treated like he acted alone.

We are losing sight of what this is really about. It is about the sexual abuse of children by one man that slipped through the cracks.

I would like to know why everyone is focused on Joe Paterno when Jerry Sandusky has been released and living almost scathe free by the media?

About two hours ago, Joe Paterno was fired…over the phone.

We couldn’t give a man that has been at this university for 61 years a better exit than a phone call?

I don’t agree with the current riot and the violence that is taking place.

I do however agree with a peaceful rally.

Several stations and people have been saying that students think this is about football and that we are out there just to be on television. They are also saying we don’t support the victims.

These statements are not correct. Several candle lighting visuals are being planned for these victims. Has the media reported on that? No. We changed our official “Whiteout” to a “Blueout” to show our support for the victims without anybody telling us to. Several organizations on campus work with the Second Mile. Believe me, we support the victims.

This is more than about football to us. I have nothing else to say on that.

I understand. I feel your anger and sorrow, but let’s act responsibly. We are trying to show the country who we are. This is NOT who we are.

Turning over a media truck, throwing rocks at police, a lamp post is now broken, and so are street signs. This is not the answer. The media is eating this up. Actions like these are fueling them. We now look like an out of control group of young adults.

This will only hurt us in the long run.

We ARE better than this.