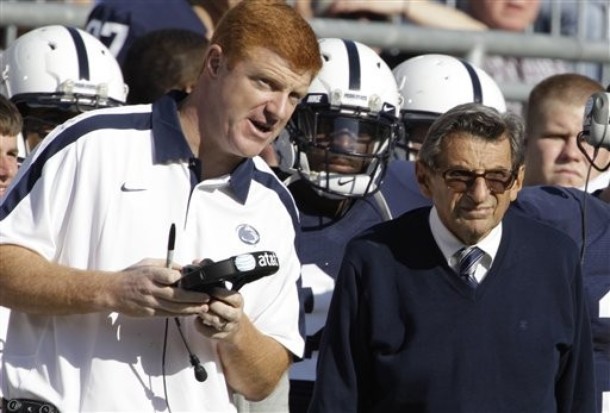 Penn State assistant coach Mike McQueary is the next guy who has to go. I don’t see how he has lasted this long. He should be gone.

As a 28-year old Graduate Assistant, he witnessed Jerry Sandusky raping a ten-year old boy in a shower and left the scene. He called his Dad then he told Joe Paterno about what he saw.

McQueary, who is a wide receiver coach and overseer of recruitment for Penn State kept this information to himself for nearly a decade before testifying before the Grand Jury.

Jacksonville Jaguar linebacker Paul Posluszny, who was an All-American at Penn State from 2003-2007 told MIke and MIke on ESPN this morning that Sandusky was around all the time during his years at Penn State. He was at practices and around campus on a regular basis. Posluszny said any time the players wanted to do some volunteer work they did it for Sandusky’s “Second Mile” program, which is supposed to helping kids at risk.

He saw Sandusky at practices and around the Penn State campus on a regular basis. McQueary saw him with children and knew that

he had access to hundreds of kids in his Second Mile program.

He knew that Sandusky had never been prosecuted for the crime which he saw him committing, yet he never had enough courage to blow the whistle and tell the police what he saw.

McQueary’s father, whom he called that day gave us a glimpse at why his son didn’t have the courage to expose this scandal.

“He’s a good kid and a tough kid. He did what he was supposed to do, and all of this has been very hard on him”, said Mike’s father John on Tuesday. “Everything from this and about this (case) has been difficult for him, but he’s a strong person and will be OK.”

He’s not a strong person, he’s a coward. The father, John McQueary is a coward. Anybody who would look the other way as young boys are raped is a coward.