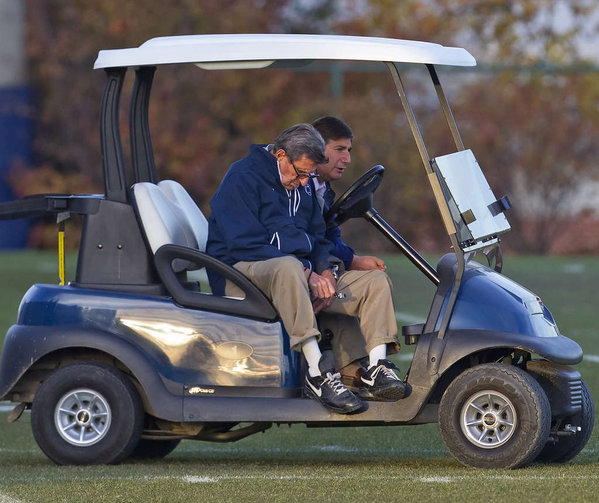 Joe Paterno was fired last night and rightfully so. In less than a week, Paterno went from being one of the most revered coaches to ever lead a football team, to being a man in the middle of one the most disgusting scandals that’s ever taken place in college football.

Unless you’ve been living under a rock for the past week or so, you know that former defensive coordinator Jerry Sandusky, founder of the Second Mile Children’s foundation, was accused of sexually abusing eight minors, including over 40 different charges from 1994-2009.

In 2002, then Graduate Assistant, Mike McQueary testified in front of a grand jury that he witnessed Jerry Sandusky engaging in sexual acts with a 10-year old boy in the Penn State showers. He did not call the police. He did not try to stop Sandusky. He shut the door and called his father. This a 28-year old grown man. His father suggested that they sit down with Paterno the next day, and they did.

Paterno told him he’d take care of it. He called Athletic Director Tim Curley and thought that was enough. Curley informed Gary Schultz the Senior Vice-President Of Finance but they did nothing. This wasn’t a university issue. This wasn’t two adults engaging in these acts on school property. This was the rape of a child. Four men had the chance to do something about it, and did nothing.

In 1998 Sandusky was accused of sexual abuse of a child, but it was thrown out. In 1999, Sandusky retired at the age of 55. He was always rumored to be the successor for Paterno at Penn State University. He was a great defensive coordinator. But he was never even rumored to take another job in football. What I find even more troubling is the fact that McQuery walked in on this in 2002, when he was a graduate assistant.

In 2003, he was now a full-time coach. Ray Gricar, the district attorney who didn’t file charges against Sandusky, subsequently went missing in 2005, and was declared legally dead in 2011, less than a year before he planned to retire and all his files and evidence would have been turned over to the incoming DA. His computer was found in a river with the hard drive removed. The hard drive was recovered a little further up the river and was completely destroyed. Now I have no evidence at all that any of this is linked to the Sandusky scandal, but it just seems a little more of cover up than the coaches just being negligent to me.

This has nothing to do with football. This has everything to do with the morals of men. Three men had the chance to stop this and they didn’t. In fact they enabled it. Sandusky was allowed to keep an office, even in retirement, at the Penn State Athletic Facilities. He was able to run his charity to prey on the innocence of his victims for the next seven years. Seven years of the sexual abuse of little kids who needed help and thought this man was giving it to them. Seven years could have been erased.

Mike McQuery, Joe Paterno, Gary Schultz and Tim Curley should all be held accountable for every one of Sandusky’s discretions over those seven years. They should all be in jail. But they won’t. Everyone in the program from top to bottom should be fired.

The program itself should be given the NCAA’s Death penalty. But let’s face it. Students didn’t have lunch with a professional football player. They didn’t trade clothing, rings and autographs for tattoos or take a couple bucks to live on, so we all know the NCAA won’t step in.

Here is a link to the Grand Jury Report. Read it if you dare. I must warn those who haven’t read it, it’s extremely sickening.