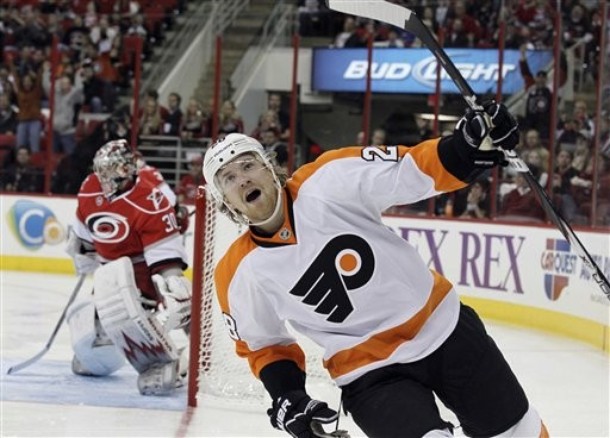 With the Eagles dream team basically being downgraded to exhibition games for the rest of 2011 and the NBA taking a long winter hibernation the time has come for Philadelphians to turn their attention towards the orange and black squad at the Wells Fargo Center and the rest of the NHL.  Without a doubt hockey is a niche sport.  For whatever reason it doesn’t receive the notoriety of the other 3 major American sports.  I myself am a die-hard hockey fan and while everyone is gearing up for fantasy football I’m scouting potential talent for my fantasy hockey squad.

Of course I enjoy my football on Sundays (and Monday and Thursday nights) but to me hockey is a special sport.  It contains tradition like no other.  The Stanley Cup personifies what a championship trophy is all about.  It displays the names of all past winners and is passed around from year to year.  What’s there not to like about the sport.  It has all the physicality of the NFL, all the nonstop action of the NBA, and the strategy of a Major League Baseball game.  It’s even played on a sheet of ice and to top it off its played more than once a week.

With the Eagles out of the way and no NBA in sight casual hockey fans in the area, or even those who don’t watch at all now have a great opportunity to dive head first into the Flyers and the rest of the NHL.  Really it’s the only sport available on the pro scene for the next 3 months until pitchers and catchers report so for those who have never watched or occasionally watched over the years it’s a chance to embrace the sport.  I know a lot of casual hockey fans in the area that get on board late in the season or during the playoffs and once they arrive the intensity of the game grabs them by the neck.  The problem is most of these spring time hockey fans have no idea how the Flyers or any other team arrived to the playoffs because football and basketball engulf everyone’s attention here in the states.

In Philadelphia we’re not only lucky enough to have a hockey team but we have a team that is competitive every season and a rich part of NHL history.  With the Eagles continuing to let everyone down it’s time we focus on this young Flyers team.  So far this season the team is not only competitive but they are fighting for the top spot in the division with the cross state rival Penguins.  Claude Giroux is leading the way with 11 goals, 11 assists, and 22 points and showing everyone he can be the main guy on the team.  The addition of Jaromir Jagr has been a success so far as well as he’s currently second on the team in points with 17.

Although goalie Ilya Bryzgalov has been somewhat inconsistent so far this season it’s still early enough for him to get it going.  This team had a complete offseason overhaul and traded away the two faces of the franchise Mike Richards and Jeff Carter.  It was a bold move made by a team that was just in the Stanley Cup finals two seasons ago.  Imagine if the Eagles traded Donovan McNabb and Brian Dawkins two seasons after making it to the Superbowl or if the Phillies traded Ryan Howard and Chase Utley two years after winning the World Series in 08.  Not enough attention was given to the Flyers for making these moves in the off season but they are turning out to be great moves so far and the young talent is rising and will

only get better over the next few seasons.

Besides the fact the Flyers have a young, solid, competitive team, right now is a great time for the casual hockey fan to get better acquainted with the NHL.  The NHL Winter Classic will be played at Citizens Bank Park on January 2nd between the Flyers and the Rangers which will provide plenty of excitement for everyone.  The Winter Classic is turning into one of the great New Years traditions and for it to be played in Philadelphia is an honor.  As Philadelphians we owe it to the sport to show what a great hockey town this really is by embracing the Flyer team from now and with the Eagles no longer in play it’s a great opportunity for all sports fans in the area.

Hockey itself is gaining exposure among sports networks.  Most of us by now have the Versus network soon to be NBC Sports Network and you can find an NHL game on their at least twice a week along with exclusive hockey coverage. The NBC Sunday game of the week also will occur this season and will actually kick off sooner than usual with the addition of the NHL Thanksgiving Showdown.  This will become a new yearly tradition for NBC to kick off their coverage of the NHL by having a game featured on the Friday night of Thanksgiving weekend and the inaugural game will feature the defending Stanley Cup Champion Boston Bruins against the Detroit Red Wings in an original six matchup.

The NHL realizes it can’t compete with the NFL when it comes to Thanksgiving but it’s clearly making strides to expose the sport more and more to American fans when they are around the TV the most which is during the holidays.  David Lehanski, the NHL’s group vice-president of integrated sales said “This is part of the overall strategy, the more events we can create, if they can be tied to holidays or high-level days when people are home watching television, if we can bring hockey to their faces, we’re going to generate more fans.”  I commend the NHL for being proactive and making it easy for sports fans to have access to games.  Aside from the NBC coverage and local coverage the NHL network follows the same strategy as the ever so popular NFL Network and MLB network by offering 24/7 coverage and live games.  The Vancouver Olympics also were a great platform for the stars of the NHL to gain exposure throughout the world and the tournament turned into one of the best ever with Canada beating the United States in a Gold Medal thriller.

Hockey season is right now and there’s no better time to jump in with both feet.  The Eagles let us all down and the NBA is turning their back on fans around the world.  It’s time for the casual fan to embrace a sport that offers a competitive spirit and physical style of play right on par with the NFL.  Football is available once a week and the dream team is dead.  And If you’re unwilling to embrace hockey in Philadelphia now then I suppose you can always sit back and watch exhibition Eagle football for rest of the season as an alternative but save yourself the disappointment.  No need to wait until spring to become a full time Flyer fan because Andy Reid has opened the door for all of us to cross the street to the Wells Fargo Center.  Hopefully next September he won’t be waiting for us to go back to the Linc.  But that’s another story in itself till then LETS GO FLYERS.

If Vick Can’t Go, Vince Young Should Be The Guy For Sunday