A Tale Of Two Flyers’ Defenses 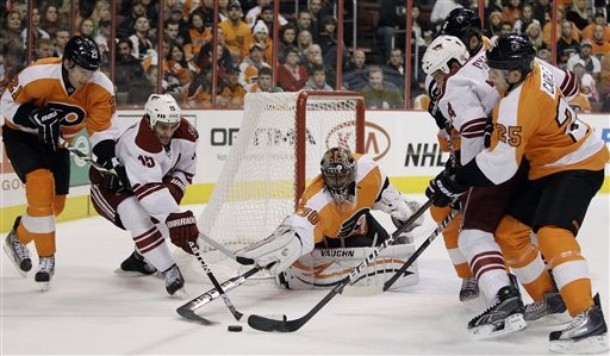 Roughly a quarter of the way into the Philadelphia Flyers 2011-2012 season, the team has been on more of a wild ride than spending a whole day at Six Flags. They’ve been in more jams than the Schuylkill Expressway only to turn it around and cruise at highway speeds. The highly-touted, $51 million goaltender became “lost in the woods” only to “find his way out” a day later. They were that consistently inconsistent team where it was frustrating to watch, yet unable to turn away.

That has changed within the last week however, as the Flyers are on an impressive 6-0-2 run in their last 8 games. The team we all thought it would be is starting to come together and gel into one cohesive unit.

However, as the saying goes: “The more things change, the more they stay the same.” While the Flyers have greatly improved since the beginning of the month, there are two issues that are still glaring:

Although the Flyers have earned points in the last eight games, the defense has still been soft in front of goaltenders Ilya Bryzgalov and Sergei Bobrovsky.  Opposing teams are able to keep consistent zone pressure for long lengths of time in the Flyers end.  More often than not, the goaltenders have had to bail the Flyers out disastrous situations.  It’s a testament to how well they are playing.  Bryzgalov is 5-0-1 with a 1.66 GAA and .945 SV% in his last 6 games.

What’s been a pattern for the Flyers is the ineffectiveness of their gap control, which is causing this sustained pressure.

Now I know what you’re probably thinking…what is gap control?

It’s quite simple actually.  Gap control is the given space between a defender and the opposing player. A defender gives a player space to move so they do not cause themselves to be taken out of the play.  Once the player gets close enough to the net or the defender, the defender steps up to cancel the opposing player with either the stick or body.

In a nutshell, the Flyers have been giving other teams too much room to work with.

A prime example of this was the game-winning goal against the Lightning in overtime.

Let’s break it down.

An outlet pass caused a 2-on-2 going into the Flyers zone.  Brayden Coburn and Andrej Mezaros were on the ice against the Bolts’ Dominic Moore and Brett Connolly.  Coburn was forced to cover Moore, and Connolly by Mezaros.  The play started with Moore carrying the puck through center.  At the beginning of the play, there were about 9 feet between Moore and Coburn.  Coburn stepped up too soon to take out the middle of the ice, and Moore skated to the outside of him.  Coburn recovered by closing his gap and forcing the body on Moore, but by taking that step to the middle, he

allowed Moore to gain leverage and force his way to the net.  Coburn was basically out of the play at this point.  Simultaneously, Connolly was streaking to the net through the slot.  Mezaros allowed Connolly no less than 8 feet of space between them all the way to the net.

Moore was able to shoot a weak backhand on goal, and Mezaros never stepped up to take away Connolly’s space.  As the rebound came off of Bryzgalov, Mezaros was out of the play.  He had skated back too far and was in the crease, allowing Connolly to shoot on a wide open net.

If Coburn had never taken the step to avoid Moore cutting to the middle, or if Mezaros took away some of Connolly’s ice, the goal would have likely not happened.  This has been a major catalyst to why the Flyers have struggled against teams off the rush, which in turn is causing more penalties due to desperation plays to avoid a scoring chance.

That’s where we find the next problem.  Discipline.  So far this season, the Flyers lead the NHL in minor penalties with 97 through 17 games.  That’s an average of 11.5 minutes a game.  It’s very tough for a team to gain momentum or sustain zone pressure if you are on a penalty kill for over a

half-period.  Many of these penalties are stick infractions, which has drawn the ire of head coach Peter Laviolette.  In order to keep the wheels rolling, the Flyers need to play smarter with their sticks and stay out of the box.  It’s only a matter of time before it comes back to bite them.

Although the Flyers have killed 34 of their last 35 short-handed situations, it allows teams to climb back into contests that should have been sealed, such as the games against Tampa Bay, Buffalo, and both Carolina contests.

Luckily, the Flyers have received the goaltending they are paying $5.6 million a year for.

Next week, I’ll be back to explain what the Eagles should learn from Flyers’ recent team-bonding trip, and how it affects the Flyers season.