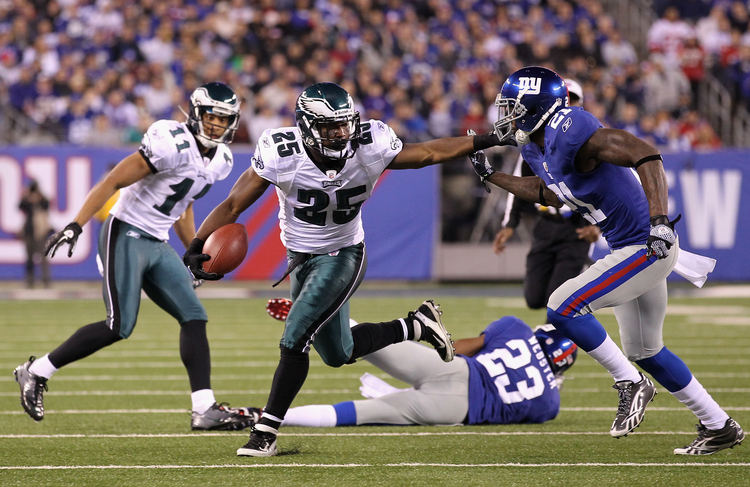 With just over one minute remaining in the game, LeSean McCoy was trotting down the MetLife Stadium field to become the NFL’s first running back to cross the 1,000 yard mark for the season. With 1,019, McCoy leads the NFL by 78 yards, and he’s ahead of other NFC running backs by 93 yards.

Sunday night’s victory marked the first game since week 16 of last season that McCoy started and didn’t score a touchdown. The third year back leads the league in total touchdowns and is just one shy of Adrian Peterson’s 11 rushing touchdowns. The average length of McCoy’s 12 touchdowns is 12 yards, with two of them longer than 30 yards.

With 11 runs of 20 or more yards, the Eagles back is tied with Chicago’s big playmaker, Matt Forte for the most in the NFL. After his 60-yard gallop in the final quarter of Sunday’s game, number 25 has one run of 60 or more yards for each of his three seasons in the league. McCoy is the only running back to achieve this feat in the last three seasons.

Shady is on pace for an impressive 96 rushing first downs this season, he has 60 through just ten games. If he continues the path he has been on the entire season, he will have the most first downs by a running back since Shaun Alexander and Larry Johnson had 107 and 97, respectively, in 2005.

After another 100 yard rushing game on Sunday, McCoy has five on the season; only Buffalo’s Fred Jackson has more. The former Pitt superstar remains as the only running back still averaging over 100 yards a game with 101.9 yards, 7.8 yards more than the next closes competition.

Through ten weeks, Shady still has zero fumbles. He has accounted for more than 24 percent of the Eagles offense and is one of just three offensive starters on the team without a fumble. Those two starters have combined for less than 23 percent of the offensive yardage production.

McCoy doesn’t have too many difficult defensive opponents in the final six regular season games. Out of the six, only one allows fewer than 100 rushing yards per game and only two are top ten in rushing defense. He should be able to keep his stunning stat line. If he does keep it up, he will finish with 301 rushing attempts, 1,630 yards (5.4 avg.) and 16 touchdowns. Pretty impressive, if you ask me.