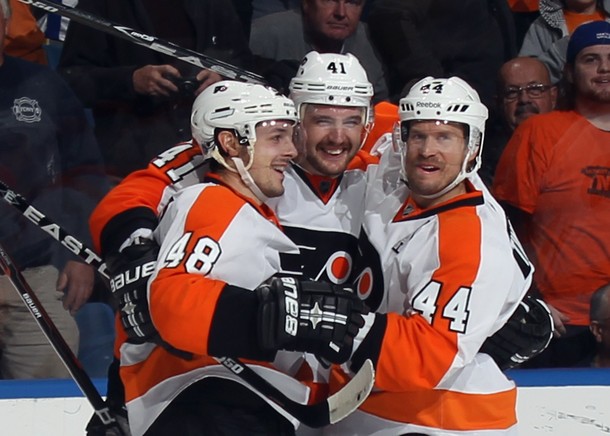 The Flyers have completed their first 21 games of the 2011-12 season with a 12-6-3 record, good enough for 4th in the Eastern Conference and 27 points. Although their record indicates that the team must be doing something right, there have been trends in both directions that warrant further reflection.

Team Scoring: The Flyers rank 1st in the NHL in goal scoring/game. If the 9-8 loss to the Winnipeg Jets and the 9-2 victory over the Columbus Blue Jackets are thrown out, the team would rank 3rd behind the Boston Bruins and the Washington Capitals with 3.15 goals/game.

Individual Scoring: Rather than focus on who is scoring, let’s take a look at who isn’t.

Wayne Simmonds averages the fifth most minutes at even strength this year and yet has just 4 goals and 8 points, enough to put him on the same pace for his usual offensive output. He has a pedestrian 4.3% shooting percentage at even strength, meaning he takes less shots on goal than Zac Rinaldo. Only Jody Shelley and Andreas Nodl, both healthy scratches last night against the New York Islanders, shoot less or have lower points/60 minutes.

Team Defense: The Flyers are ranked 21st in the NHL in goals against/game, but if you toss out that Winnipeg game (again), they would rank 14th with 2.62 goals against/game. This sounds about right, as the team has been very inconsistent in this department. Kimmo Timonen and Chris Pronger have both continued to slow down quicker than we’d hope. Andrej Meszaros can’t decide if he wants to be a top four defenseman or not, but he’s still performing better (statistically) than Braydon Coburn, fresh off his brand new contract.

Thanks to the questionable decision to start the year with Matt Walker, the Flyers are now too afraid of re-entry waivers to call up Oskars Bartulis and have since iced three rookie defensemen, two of which have been serviceable at the AHL level. Erik Gustafsson should be back from his wrist injury in time for the Winter Classic, but it’s an area of concern.

Goaltending: Neither Ilya Bryzgalov nor Sergei Bobrovsky have a save percentage higher than 0.900. Bryzgalov has been soft and Bobrovsky anxious over the course of the season, and yet they are the highest paid tandem in the NHL. They rank 16th and 18th in the NHL for goals against/60 among those who have played in 5 games or more. To some degree the defense in front of them has some culpability in those numbers, but it’s clear that they aren’t playing up to expectations.

Powerplay: The Flyers aren’t that much better on paper with regards to the powerplay (18.6% success rate currently versus 16.6% in 2010-11), but anyone that actually watches the game knows how much less irritating it is to watch now. They have stopped relying on shots from the point as the sole offense and have improved their puck moving considerably. The additions of Simmonds, Matt Read, Jakub Voracek and Jaromir Jagr have been tremendous.

Penalty Kill: Over the first 18 games, the Flyers gave up 11 shorthanded goals, enough for 7th in the NHL. In the last three games, they’ve given up 6 goals on 19 attempts, enough for a 68.4% effective PK. It would be easy to blame the absence of Chris Pronger in two of those games as the reason, but that’s a poor excuse. The brilliant 4-on-3 PK during last night’s overtime period against the Islanders is enough to convince me that their short-term failures can still be corrected.

Overall Review: To no one’s surprise, this season has not gone smoothly. The talent assembled is strong enough to be a very competitive NHL team, but the combination of youth and veteran leadership has been a mixed bag. Early season injuries have highlighted the depth at forward and the dearth at defense while the goaltending has been merely adequate. I suppose you could call Bryzgalov an improvement over Brian Boucher, who has been atrocious in Carolina, but that’s like saying, “At least he’s not Carrot Top” at a Gallagher show.

Goal scoring has not been the issue many thought it would, but the defense and goaltending have. The Flyers will need to begin dominating in these areas if they intend to gain momentum in the second stretch of the season which, unfortunately, will be spent almost entirely on the road.