Shady McCoy Could Help Birds Keep Brady Off The Field 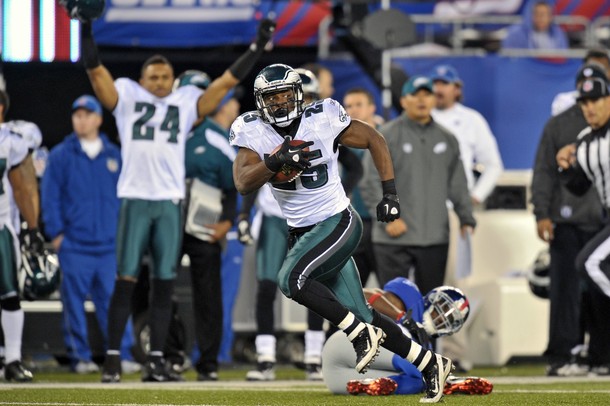 On Sunday, the 4-6 alive-again Eagles will play the AFC’s current number one seed, New England Patriots, led by future Hall of Famer Tom Brady. The Patriots aren’t lucky enough to have a player of such caliber on their defense, and it shows. New England has the league’s worst pass defense and

the 13th ranked run D in the league. LeSean McCoy should, again, be a focal point for the Eagles.

While running offenses have had their way against the Patriots defense, they have not allowed a single player to run for over 100 yards in a game. Instead, the Pats have been vulnerable to a duo or trio of running backs. Eagles’ fans may get their first look at extended playing time for Ronnie Brown and/or Dion Lewis beside Shady in the backfield.

With Michael Vick held out of practice on Thursday, along with Jeremy Maclin, Vince Young looks to be the starter for this week’s matchup. With Vick out last week, McCoy got 23 carries, only the fourth game of the year in which he carried the ball more than 20 times. The Giants were able to shut him down for the majority of the game but the offense still relied on the third year back when they needed a big play, and ultimately, he delivered the final blow.

The Eagles running back remains the sole running back in the league averaging over 100 rushing yards per game. Coming off his fifth game of the season where he passed the century mark, he will face a defense that has allowed 105.3 rushing yards per game. While only allowing an average of 4.3 yards per carry, opposing backs need almost 25 carries to reach that mark. This is yet another reason to feed Shady the ball.

The biggest name in the Patriots front seven is Vince Wilfork, a 320-pound nose tackle, or Jerrod Mayo, the former Defensive Rookie of the Year. Both of these defenders shut down the middle of the field and leave the Patriots vulnerable around the edge. With the speed the offensive line and McCoy have, outside runs should be a big part of the offensive attack for Sunday.

The Eagles opponents will come in off of a short week after a physical Monday night win against the Kansas City Chiefs.

The defense set the tone in last week’s win against the Giants. If the Birds establish the run early, they could set a tone with the league’s number one rusher and keep their season alive. At least for one more week.