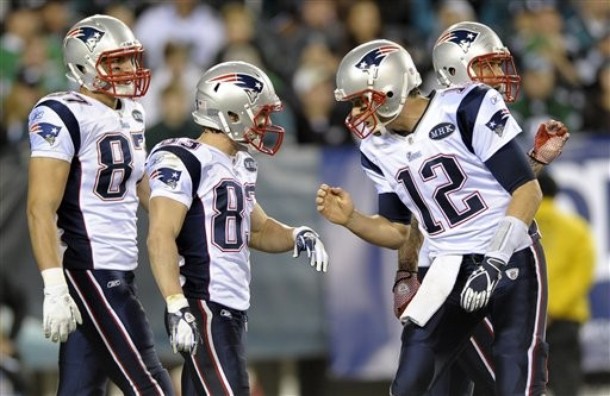 There was no comparison on Sunday between Tom Brady and Vince Young. One played a flawless game, and the other just played mediocre and inconsistent.  Brady carved the Eagles defense all day, finishing with a 134.6 passer rating. He made some unbelievable throws, and sustained balanced scoring drives down the field. This wasn’t the same for Young.

Vince Young regressed in his second start. He was inaccurate at times, and had many missed opportunities. This was different last week. Young was clutch when the game was on the line against the Giants. He led an 8 minute, game-winning drive that opened the eyes of many around the league. He didn’t do that Sunday. Young just played very inconsistent, and looked like a backup QB at times.

Young started off fast, leading the Eagles to an early 10-0 lead. The first TD was set up by a 58-yard completion to Riley Cooper. It was a perfect throw. Young led Cooper enough, while putting the ball right into his hands. On the second drive, Young once again threw a long pass to DeSean Jackson that set up a field goal.

Even if this ball was a little behind Jackson, Young still was able to get the ball in Jackson’s radius. It just looked like the Eagles had that “Bombs Away” attitude that made many think that the Birds had a realistic chance of winning. After this drive, Young didn’t play the same until the game was basically over. Young just wasn’t able to be consistent enough to stay with the Patriots.

Young didn’t do anything special, but some of the throws were there. Drops plagued the Eagles throughout the whole game. DeSean Jackson dropped, what looked like two sure TD passes. Yet another example of Jackson’s lost focus because of his contract issues.

The Eagles had to play 60 minutes to beat the well-coached Patriots. Young and the Eagles offense just weren’t able to stay with them. They didn’t have much luck after scoring an early 10 points. With the game now at 10-7, the next drive resulted in a three an out.

After the Patriots missed a FG, the Eagles couldn’t capitalize again. Young threw another INT. He was looking for DeSean Jackson, but underthrew him. Jackson beat his man 1 on 1, but Young’s pass was short and led to a turnover, and another TD by the Patriots. The Eagles weren’t able to answer again with Young showing his accuracy problems on 3rd down. Following that, the Eagles defense gave up more points to the Patriots.

The Eagles defense had no answer for Tom Brady, and gave up yet another TD to go up 24-13. The Eagles tried to run the 2-minute drill, but the whole offense was out of sinc, and Young was inaccurate again. So, the game was basically over after the first half. Yes, Young’s accuracy and footwork improved in the second half, but this was when the Patriots were up for good. Young finished with good numbers 26/48 for 400 yards 1TD and I INT, but most of those yards were pilled up when the game was out of hand.

Brady was better when the game counted. He finished 24/36 with 361 yards with 3 TDs and 0 INTs. Down 10-3, the he rallied the Patriots to score 31 points to the Eagles 3. On every drive, the Patriots used balance, and Brady carved the Eagles defense up like Thanksgiving turkey. He made some great throws, and fit the ball into tight spots on multiple occasions.

He used all of his weapons, Gronkowski, Hernandez,Welker, and even Deion Branch to exploit the Eagles defense in every way. The defense constantly looked like they lacked communication and were constantly out-foxed by Brady. It just looked too easy at times. They couldn’t keep up with the Patriots high octane, fast tempo offense.

This game was the tale of a classic Tom Brady. He was given great protection, and sliced up the Eagles defense. He sustained drives, and most importantly played consistent, as a starter should play. Vince Young didn’t play this way when the game mattered. He was off-target many times, and couldn’t lead the Eagles down the field on a consistent basis.

It just seems that Young isn’t ready yet, and that his accuracy problems may not be fixable. The opportunities were there, especially late in the first half, but Young didn’t take advantage of them.  Brady did, and that why some call him one of the greatest ever to play the game.

It just seemed like another day in the office for Brady and the Patriots. The Eagles just didn’t show up for work. If they keep playing this way, some on this team will be without a job. This includes some of the coaches, and I’m looking at Big Red. Time will tell all. However, if this team continues to play soft and uninspired football, Reid may lose his locker room. Then Reid also would deserve to lose his job.