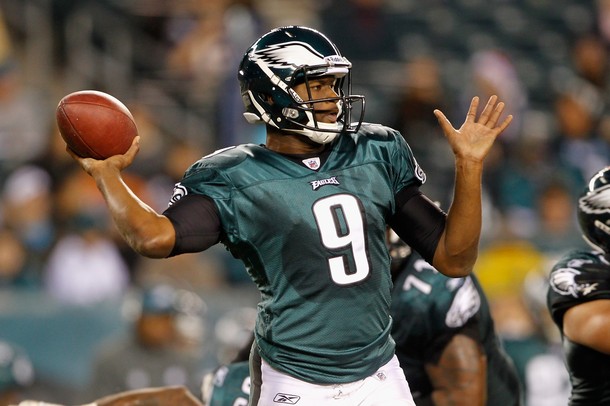 For the seventh time this season the Eagles are losers. The latest episode is a 38-20 debacle against the Patriots.

On top of the defeat, Vince Young has confirmed that he is only a shell of the player that stole the show during the 2005 National Championship. The former Texas Longhorn threw for a misleading 400-yards in defeat. Under his direction, the offense had no rhythm.

Despite opening the game red hot, completing two of his first three passes for a total of eighty yards, Young could not maintain the up-tempo pace. The Birds did not muster a third down conversion until the third quarter. They finished the game just four of thirteen in the category.

The sixth year quarterback’s inaccuracy was key in defeat. He ended the game with 26 completions on 48 attempts to accompany a costly interception and a garbage last minute touchdown.

Had the Eagles been playing a low level NFC team this may have been enough to garnish a victory. However, against one of the league’s best franchises, the game was nearly over before it began.

Young is certainly not the main reason that the Eagles are 4-7. That being said his days as a franchise quarterback have likely ended.

And one final thought…

Sunday’s game made it abundantly clear that Eagles have a leadership crisis.

After thirteen seasons Andy Reid has visibly lost the support of his players. Much of the fifty-three-man unit was mentally checked-out of the ball game by halftime. Poor body language from a plethora of players, including star wide receiver DeSean Jackson, serves as conformation of the aforementioned claim.

Worse off, this Eagles team plays as a group of individuals and not as a unit. They look like a group for fifty-three men who collect fifty-three paychecks instead of one team that is driven by victory.

I am not questioning the competitive nature of these players. I simply am pondering if they have lost their will to win.