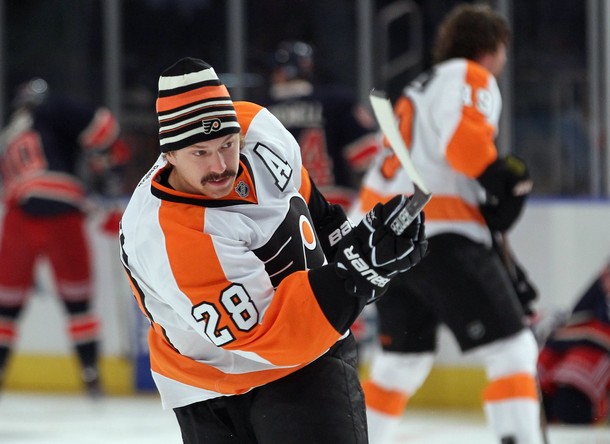 Claude Giroux has steadily earned himself elite status in the NHL, sitting 2nd in points (tied with former Flyer Joffrey Lupul) and 3rd in goals behind Toronto’s Phil Kessel. The weight on his shoulders has gotten even greater with injuries to James Van Riemsdyk and Jaromir Jagr.

Giroux averaged 18:42 of total ice time per game last season. He has averaged 20:18 this season, with only Chris Pronger and Matt Carle averaging more minutes per game.

Following the aforementioned injuries, Giroux has seen his ice time skyrocket to over 25:00 in the last two games against New York and Montreal.

If the Flyers don’t make some personnel changes, they run the risk of burning him out on the road ahead.

Optimally, the Flyers would spread out the ice time among all four lines. However, they have been icing Jody Shelley for an average 4:00 per game while Zac Rinaldo and Harry Zolniercyzk skate about 6:00 and 7:00, respectively.

This isn’t going to cut it. Harry Z and Rinaldo are at least inexpensive to keep around, but Shelley’s $1.1 million cap is making him more expendable each day that he spends planted firmly to the bench.

Brayden Schenn is finally healthy again and would be a great addition to help eat some of Giroux’s minutes, but the organization can not afford his contract without shuffling some bodies.

Replace Kevin Marshall with Oskars Bartulis (or don’t carry ANY 7th defensemen), replace Harry Z with Jon Kalinski (a great shot blocker and penalty killer in the style of Blair Betts), and waive Shelley and suddenly Schenn’s contract fits without having to put Andreas Lilja on LTIR.  If they were willing to risk the LTIR penalties, they could also put Lilja on LTIR and replace Zolnierczyk with Schenn.

Giroux’s time on the PK can also be reduced as additional time is dispersed to Kalinski and Andreas Nodl. Kalinski scored on 1 of 2 shorthanded breakaways Saturday night against the Albany Devils, and would be more than capable of filling the role that a fourth liner should.

It’s way too early in the season for Peter Laviolette to run Claude Giroux into the ground, and injuries are no excuse. There is enough talent in this organization to adjust minutes and roster positions accordingly, whether that includes Shelley or not.

The Flyers have the advantage of not playing again until Friday, giving them plenty of time to rest. With back-to-back road games and a dense schedule in mid-December, they will have to make some decisions soon or run the risk of exhaustion for their best player.

Reid & Eagles Embarrassed At Home By The Patriots 38-20