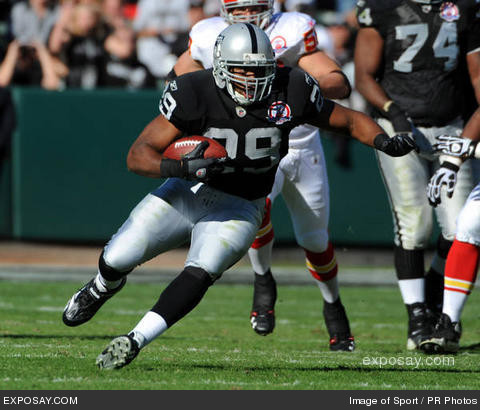 It’s NFL week 13 and the playoff situation is starting to take shape.  All of the three games that are featured this week have playoff implications.

OAKLAND at MIAMI, THE PICK, MIAMI -3

The first place Oakland Raiders will travel east to play the three and eight Miami Dolphins. Oakland comes into this game with some injury problems. Darren McFadden has already been ruled out this week, so this means Michael Bush will get another start in the Raiders backfield. Bush has filled in nicely for the Raiders, but he is not the game changing back that McFadden is. When they finally arrive on the east coast after a long flight, they will run into a Dolphins team that has has played pretty well of late. Miami has won three of their last four and covered five straight.

After winning three straight football games by double digits, the Phins fell to the Cowboys on Thanksgiving day, but still were able to cover. Miami has been a very tough team to play over the last five weeks, and I think they take advantage of a Raiders team that I don’t believe will be at their best this weekend. Take Miami laying a field goal.

The Saints put on a show last Monday night as they routed the New York Giants 49-24 on national television. The Lions on the other hand came up small in a very undisciplined effort against the Packers on Thanksgiving. Not Just did the Lions lose the game last week but they also lost their star defensive tackle Ndamukong Suh to suspension. With the loss of Suh, the Lions will need to pick up the slack in other areas.

Quarterback Matthew Stafford’s hand appears to be improving, and he will be taking off the glove that he has been wearing in recent weeks. Stafford has not been playing at his highest level of late but as the hand improves I believe his play will improve as well. New Orleans is facing a tough task as they are working on a short week.

The Saints have struggled recently coming off Monday nights. Since 2010, the Saints are 0-4 to the spread following a Monday night game. That is a very troublesome trend for New Orleans especially when being asked to lay nine points. I expect both offenses to score in this one, and I think Detroit can keep this game close. Nine points is a lot to lay, and I wouldn’t lay them here. Take the Lions getting nine.

The Cowboys will travel to Arizona as a road favorite on Sunday. Dallas has been a very questionable road team in recent years, and has struggled mightily in the role of a road favorite. Since 2009, Dallas is 2-7-2 against the spread as a road favorite, and just 2-4-1 to the spread in their last seven on the road.  The Cowboys have won four straight but have only covered once in their last five and have been very unimpressive at times. They also could be in for a let down game as they play the New York Giants next week. Arizona has been playing well of late.

The Cards have won three of their last four, and covered four of their last five. Arizona is a team playing solid football rite now, and I like them getting points rite here. At the very least, I expect the Cardinals to keep this game very tight, and wouldn’t be shocked if they win outright. Take Arizona getting four and a half.

Five Players I Would Trade Andre Iguodala For

Is this some sort of joke? Carson Palmer and Michael Bush are on fire right now, New Orleans can run a score up fast, and Dallas against Arizona is a crap shoot.

How the hell don’t you mortal lock the Patriots vs. the colts and san fran vs. the rams?

this guy is a joke

About the only mortal/stone cold/water in your face “Lock of the Day” is that the Eagles won’t lose since they are not playing..

Losses to Steelers,Rvens and Bengals (Win over Browns)
Losses to Saints,Flcons,TB Bucs (Win over Panthers)
Loss to the Bears or Lions
Win over the Cardinal or Rams
Split their 6 NFC East Divisional Games to finish 6-10 in 2012
Coach AR and his Entire Staff are fired the day after the Season ends..

Lurie contemplates selling team to some Los Angeles Investors.. Governor Ed Rendell gets a group together to purchase the EAgles and Rendell makes himself the President and Vice-President of Football Operations including overseeing the Scouting/Draft/Free-AgencyPlayer Contracts & Roster Management..The Eagles fail to win more than 6 Games in a Season for the next 9 Seasons as the “Golden Era of Eagle Football” comes to a screeching halt and never to be seen by anyonewho is alive today…

HERE’S THE ONE: Giants over the Packers.

I wouldn’t be surprised Drummer, The Packers have to play a bad game sooner or later…

I was thinking how cool it would be for Dawkins to come back and finish as an Eagle(even as a LB) but Broncos are winning and actually a fun team to be on. Sad to think Dawkins would not even want to come back

I see why NY fans complain about Coughlin’s play-calling.

In the 4th, the Giants were running the ball down the Packers’ throats. They drove down the field, picking up nothing less than 6 yards each time. Then Coughlin decided it was time to pass, and he never went back to the play that got them down the field. As a result, the Giants had to settle for a field goal, and instead of having a 6-point lead, the Giants were trailing by 1. That changed the entire complexion of the game.

Now Coughlin comes back to the play – running to the left side.

I already predicted the Dallas loss. Could I be 2 for 2? It would take a miracle.

I like what McCarthy did. He played it safe – didn’t run out from the end zone. Play for the OT – nothing dangerous.

I expected Coughlin to go back to his exotic coverages used in the beginning of the game – it was like 8 defensive backs.

What a great game! That’s why I love the NFL.

To Drummer,
Kevin Gilbride calls the Offensive Plays for the GIants and not Coughlin.
I agree the Giants running game was working and had the PAckers Defense on their heels, but with Woodson out, they probably thoguht easier to beat through the air…
Poor Eagles who can’t muster a fight against anyone it appears.. On a Week where the Cowboys,Giants,Falcons and Bears lose, the EAgles again blew a chance last game to at least remain in long-shot hunt… Does anyone realize trhe Eagles went 1-3 versus the NFC West Division this Season..
Look how bad the NFC East has become.. (where the Eagles are 3-1) and then 1-7 versus the rest of the NFL… it’s pitiful ..

Anyone wnat to wager that the Dolphins kick the Eagles ass next week too..
The Dolphins whohave won 4 out of their last 5 Games and their Defense has really played pretty well and especially against the Run and has only averaged agiving up about 10 Points per game over the last month. They will stuff the box and take McCoy out of the game making Vick,Young or Kafka or whoever QB’s to beat them through the air.. My $$$ is on the Dolphins… With Vick being rusty, Maclin being rusty, a disinterested D-JAx, This Games spells another disaster… .Dolphins 26 – Eagles 13

Allow me to clarify. When I refer to Coughlin’s play-calling, I’m talking about his accountability. That’s “his” coach calling the plays, and he’s obviously okay with the way the plays are being called. They’re only a few yards, or a phone call, away from one another.

I say the same about the Eagles. I often refer to “Reid’s” play-calling, as do many others.

I hear you Drummer, in the end, it really doesn’t matter.. They run the plays that they want to run.. Is anyone bitching or complaining about the 9-3 Saints who throw the ball 65% of their plays too… or the Patriots,Packers,Lions,… It’s about execution and not about the “play-calling”, too many of you guys get fixated on the Pass-Run ratio,, The Eagles are a Passing team, that’s what they do and will always do under Coach AR…It seems to be working for the good teams in the NFL, the Eagles are just not a good team this Season plain and simple//

Paulman maybe you should do a little less talking and a little more listening. Ray Diddinger the person who knows more about the Eagles than Andy, Marty, Juan, Joe, Howie, and Jeffrey combined has given the win percentage with a balanced offense repeatedly and it’s alot. I want to say like 68%

I know it’s off-balanced RTB and have mentioned this for many years which Is why I stated 3 Years ago the Eagles would never win a SB Championship under COach AR.. WHat I am saying though, is that other pass quite a bit and have won since they execute their passing game in the Red-Zone a 100 times better than the Eagles ever have.. Other teams have big physical WR’s or athletic TE’s who create mis-matches, size advantages to be able to isolate their big targets for Alley-Oops, or Back-Shoulder routes,etc,etc and the Eagles do not have these Type of Recevirs and really haven’t had since TO days.. Speed is great betwen the 20 yard lines, but once in the Red-Zone it’s about size,strength and athleticism and the Eagles just don’t have those type of Receivers like the Saints,Packers,Patriots,Giants or like the Colts did during their SUper Bowl Runs.. I am sure R Didenger being the smart fella that it is would agree with my assesment…
The other key component is the the EAgles QB’s (whether McNabb or now Vick are no where near as Accurate as the Brady’s Mannings,Brees are and especially once your in the Red-Zone, being timely and accurate is very critical and the Eagles QB’s pretty much need WR’s to be open to make a play which you usually won’t be against a good Defensive team in the Red-Zone)

Lions lack of running game is catching up now,Brady needs balance , Rodgers can get away with it. Starks ran alot last yr playoffs. Obv. if it is not working for reid he should change it, i believe manning and colts would have won more atleast better chance, same with brees if they were not 65%or more

thnk u runthe ball, ray knows what he is talking about,

Well one thing we all know for sure is that the EAgles will have lots of practice time this off-season to implement a new balanced approach, no excuses and no BS from this AR, his Staff and the Front office…