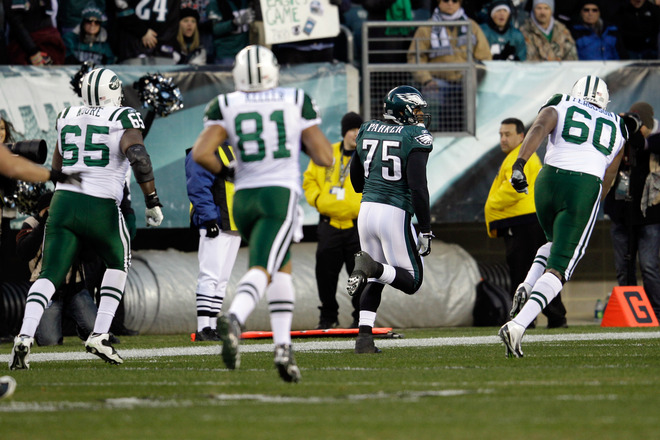 The Eagles played one of their best games of the season en route to a 45-19 drubbing of the visiting New York Jets.  Philadelphia jumped out to a 28-0 first half lead, riding the momentum of an outstanding defensive effort.   The first score of the game occurred when safety Kurt Coleman put his helmet on a Santonio Holmes reception, forcing Holmes to cough it up and allowing defensive lineman Juqua Parker to get the scoop and score

for a touchdown.  In addition to the defensive touchdown, Asante Samuel and Jamar Chaney added interceptions.  Samuel’s pick came on the heels of a muffed punt which the Jets recovered at the Philly 14, bailing out a turnover-prone Eagles Special Teams once again.

Defensive end Jason Babin added 3 sacks to his total, giving him a league-leading 18 on the year.  This was Babin’s second consecutive 3 sack game and his performance moved him within 3 of Reggie White’s team record (although White did it in only 12 games in the strike-shortened 1987 season) and a mere 4.5 short of Michael Strahan’s NFL record 22.5.

Philip Hunt recorded the other sack for the Eagle defense, but when they weren’t recording sacks the Philadelphia defense was still harassing Jets quarterback Mark Sanchez all day long.  Between batted balls, legal hits on the quarterback and overall pressure, the Jets signal-caller was never able to get comfortable or establish a rhythm.

Trent Cole was surprisingly quiet for the Eagles, tallying 4 tackles but no sacks.  With the added attention being paid to Babin at the other end, I would have assumed that Cole’s sack numbers would be higher than they are.  DRC was once again lost in the shuffle, failing to record a single tackle, but a quiet performance is better than a poor one.

Coleman continued to be a bright spot for this Eagle’s defense, as he was credited with the forced fumble on the Holmes play that resulted in Juqua Parker’s touchdown ramble.  Coleman also made a nice play deflecting a pass in the end zone that was intended for the much taller Plaxico Burress.  The 2nd year safety did get beat to the inside on Santonio Holmes’ touchdown reception, although it did appear as if the help Coleman expected from the inside was late in arriving.

In an earlier post, I indicated that I felt the Eagles linebacking corps was going to have to do a good job against a Jets offensive line that was much larger and more physical, and they did just that.  The Eagles front seven held the jets to 94 yards rushing on 27 carries, equaling a paltry 3.5 yards per carry.  The majority of the Jets rushing production came from feature back Shonn Greene’s 18 rushes for 73 yards.  For the most part the linebackers did a good job in coverage (Sanchez only threw for 150 yards and had 2 picks).  As always, this young group was able to fly to the ball which prohibited the Jets from doing much damage in the yards after the catch category.

Overall, the Eagles defensive performance against the Jets was an impressive one.  They did an excellent job containing an unrelenting rushing attack and were opportunistic with respect to turnovers.  Philly managed to keep the penalties to a manageable level.  The one major penalty came when Nnamdi Asomugha interfered with Plaxico Burress inside the red zone which set up the Holmes touchdown in the second quarter.  The Jets, on the other hand, seemed to either have a holding call or a false start every time they ventured into the red zone.

When all is said and done, this game was a win for Philadelphia against a quality 8-5 opponent that is in the thick of the chase for a playoff spot in their conference.  The Philadelphia defense imposed their will upon the Jets offense and rattled a shaky quarterback from the outset, preventing him from building any confidence during the game.  If the Eagles can keep this up, they may end up backing themselves into the playoffs (with some help, of course).

Did Andy Reid Save His Job With The Win Over The Jets?