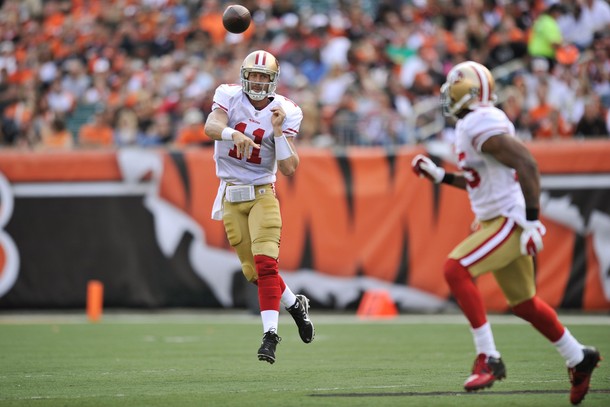 At this time of the season, a team’s post season prospects could have more to do with the probability of them winning a game than their talent.  In this week’s picks, Washington will host the Vikings in D.C., the Lions will host the Chargers in the Motor City and the 49ers will head north to take on the Seahawks in Seattle.

MINNESOTA at WASHINGTON – THE PICK, MINNESOTA +6.5

The Redskins impressed last week with a 23 to 10 road thumping over the New York Giants. However, this presents a very high risk for an emotional let down this week as the Skins will host the 2-12 Minnesota Vikings, who were thumped pounded by the far superior New Orleans Saints last Sunday.

The Vikings welcomed back star running back Adrian Peterson, but weren’t able to go toe to toe with one of the best offenses in football. This week is different however. Washington can do some really good things defensively, but inevitably their offense will allow Minnesota to stay in the football game. The Vikings blowout loss to New Orleans, and the Redskins dominant win against the Giants, presents a great angle for us to play this week.

Minnesota failed to cover the number by a margin of fifteen points while the Skins covered their spread by twenty. You also have the Redskins in a position where they are being asked to transition from an underdog last week, to a favorite this week. This is a great angle to play, and we’re going to go ahead and play it. Take Minnesota getting the points.

The Lions though are in a different situation as they are looking to get into the playoffs for the first time in over a decade. Detroit has not been a great team in the second half this season. The Lions have failed to cover their last four, and are just 4-5 straight up since starting the season 5-0. They were able to escape from Oakland with a victory last week as the Raiders blew a thirteen point lead late in the fourth quarter, but I don’t think the first three and a half quarters should be ignored.

Detroit is struggling to put it all together rite now, and a red hot Chargers team can take advantage of that. Take the Chargers as a slight dog here.

The 49ers took care of the Steelers on Monday night, but now they have to go to Seattle and play the Seahawks on a very short week. The 49ers are a very good football team, and the Steelers win was very impressive.

But let’s not forget that Pittsburgh was very banged up, and Steelers quarterback Ben Roethlisberger probably should have never played on Monday night. Roethlisberger aided the Niners victory with four turnovers, three of which were interceptions. The 20 to 3 victory looked much more lopsided than it actually was as the Steelers actually out gained San Francisco by more than 100 yards in the contest, and the turnovers made all the difference. When it comes to turnovers, Tarvaris Jackson has been solid lately.

Over the last three weeks he hasn’t thrown a pick. Now don’t get me wrong, you won’t Confuse Jackson with Drew Brees, but if you take care of the football you can win a lot of games and the Seahawks have done that. They’ve won five of their last six, and Seattle’s defense has helped the cause by playing at a high level as well. The Seahawks are playing very well right now, take them getting two at home.

Cowboys’ Weapons Will Be Tough Task for Eagles Defense

49ers vs Seattle is an interesting game and pick and don’t underestimate the dislike that coaches Pete Carroll & Harbaufgh have for each other which should make a great contest.. Remember Harbaugh’s knocking off an undefeated USC Team a few years back and rubbing it in a little which got Caroll all fired up..
These 2 Franchises are on the right path to be good teams over the next few Seasons as the NFC West returns to good competitve Football again…
I like the Seahawks with the points at home which is a difficult place to play but I do not think the 49ers will be too flat of lackadasical for Harbaugh loves to beat Carroll and there is no love lost between these Coaches…

I guess 1 our of 3 picks isn’t bad Steve.. Your getting killed this year..
How did my Panthers do again this week… Take the Panthers plus the points again next week in the dome versus the Saints …. and maybe even the Redskins plus the points over our Eagles who will be on a downer after getting eliminated..