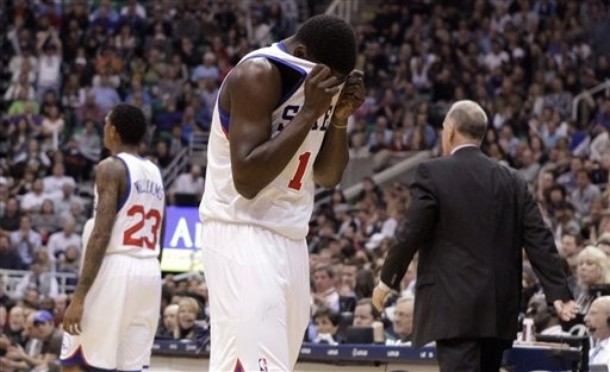 I took this game very personal. One of my buddies from work is a big Jazz fan. He is also a Cleveland Indians and New York Jets fan. He grew up in Delco. I know it makes no sense to me either. Usually you will have your Knicks, Lakers and now Heat fans around here. You know the usual bunch of frauds. But the Jazz? Whatever.

Seriously, I did not think they were going to make a foul call on the Jazz in that quarter. The Sixers did come out of halftime with 11-2 run to take the lead but the Jazz answered right back. This game was frustrating as hell between the refs, the Sixers post defense, and how the Sixers played to much one on one at times.

I still cannot believe that Lou’s layup did not go in. Damn, the ball was in. You wrap all that together you get a very frustrating loss to the Jazz 102-99. This game was there for the taking for the Sixers.  They just could not grab it. Here are some of the things that I noticed…

– Iggy started the game off pretty well. He shot the ball good again shooting 6-11 from the field. BUT. Come on bro! You have to knock down those free throws bro! He hits that big three with a guy in his face but misses 3 crucial free throws. SMH.

– Man, I am looking pretty bad right now of that prediction of Evan Turner average 14-16 points a game. So far this season he really does not seemed to be involved in the offense. Some his fault by standing around and some is not a getting play called for him. I said before the key for Turner is 30 minutes a game. He got 18 minutes tonight with a FAT goose egg.

– The way the Jazz owned the low-post tonight you would have thought that the Sixers got killed on the boards. They did not. Jazz had 41 rebounds and the Sixers had 40. Really don’t know how that happen. Sure did not look that way.

-Elton Brand had his best game of the season with 12 points and 7 rebounds. Not really saying much though. He was only averaging 7 points a game going into the game against the Jazz. He had 7 points at the end of the first. Though he still looks very slow out their right now.

– Holiday had a very solid game scoring wise. He attacked Harris and Watson all night long. I just wished that he would have run the offense a little more. Like I said before they played to much one on one. What did impress me was that Holiday 10 points with his left-hand. He was 5-5 from the field with his left-hand. Yes, I was counting. He finished with 22 points and 3 assists.

– That was the first time I ever seen a NBA game start off with two straight kick balls. What? I am trying to get my mind of this game. Umm Thad, never take a fade away jumper again. PLEASE.

-Dude, Heyward can play. They had him playing off the ball in the beginning game. You saw in the fourth that they put the ball in his hands and he made plays. He is athletic and really handles the rock. The Jazz should try to use him more as a point-forward. He also knocked down that little mid-range jumper late in the game. Ice in the veins.

-Speaking of young player looking good. Derrick Favors had his best NBA game ever so far. He was all over the place down low. He even faced up the basket and knocked down a couple of 10 to 12 footers. He finished with 20 points and 11 rebounds.

-Should just throw Millsap in their as well. He and Favors owned the paint tonight. Hawes did all he could against them. He is just not that gifted defensively. Millsap even stepped back and knock down a three as well. I did not see that coming. He finished with 14 points and 14 rebounds. He gets away with just hammering opponents at home. He shoved the hell out of Hawes on that near tip in at the end of the game. Just saying..

-Devin Harris can really score but can not guard anyone. Holiday was made him look bad tonight on the defensive side. He got taken out early on the first quarter because of his poor defensive play.

– A Jazz beat writer from The Salt Lake Tribune tweeted this on his account. ‘Classic Sixers, up by 6 with a chance of going up 10 respond with a turnover and a shot clock violation.’  Umm, apparently he never watches the Sixers. That is not our problem. We need a closer. That’s our problem and another low-post player.

Man, still can’t believe that Lou’s shot did not go down. One thing we learned from this team last season that they always bounce back. They are playing Golden State next. That will not be an easy task. By the way the Jazz do have some nice young pieces. If the Sixers had that true number one scorer he wins this game tonight for them. I am going to hear it from my buddy. Here is the complete recap of the game