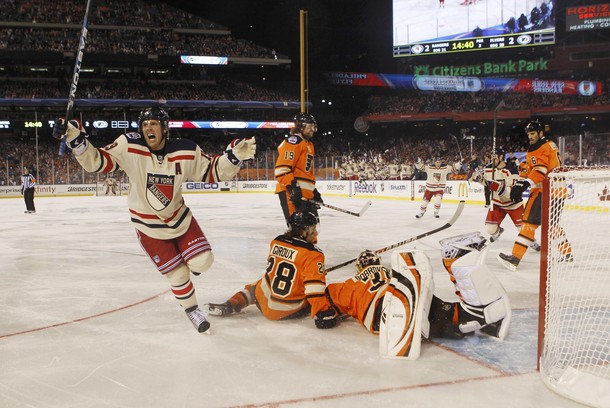 Prior to the puck drop, every road team has won the Winter Classic except for the Philadelphia Flyers in 2010.

That record remained intact today as the Flyers blew a 2-0 lead and collapsed in the third period to the New York Rangers.

Much like their most recent meeting, the game remained scoreless after the first period.  Neither team had settled in, though the Flyers edged the Rangers 12-9 in shots.

Jaromir Jagr left the game during the first period. He was back on the ice for the second, but only took two more shifts for the remainder of the game.  He is believed to have a minor leg injury that shouldn’t keep him out very long.

Claude Giroux collected a cross-ice pass from Max Talbot and roofed it to make it 2-0 less than two minutes later. The lead was short-lived, though, as fourth liner Mike Rupp fired a shot on Sergei Bobrovsky that eluded him. Andrej Meszaros was screening Bob on the shot when he should have engaged Rupp.  Rupp mockingly threw out a Jagr “salute” after the goal, though he looked more like a Nazi sympathizer than a hockey player.

Rupp’s supremacy could not be contained, as he tied the game early in the third period.  It was a soft goal that snuck under Bobrovksy’s arm at the side of the net. The momentum shift was as powerful as the wind blowing through Citizen’s Bank Park, and the Rangers converted to full shut-down mode.

Brad Richards scored the game winner at the 5:21 mark. Giroux lost track of Richards, who was left alone at the backdoor.

The referees made two questionable calls in the last two minutes that caused Rangers coach John Tortorella to wonder if they had conspired with NBC to force overtime. The first was matching penalties on Kimmo Timonen and Ryan Callahan when Timonen blatantly (and unnecessarily) hooked him following a routine dump-in. The second was a penalty shot after the referees believed Ryan McDonagh covered the puck with his hand during the ensuing 4-on-4.

Bobrovsky played decently today, stopping 30 of 33 shots, but Lundqvist clearly outplayed him.  Lundqvist is on his way to a Vezina Trophy nomination with a 17-7-4 record, 1.92 goals-against-average and 0.937 save percentage.

It’s difficult to say what needs to change, as the Flyers are still one of the best teams in the NHL.  With the roster built as it is, however, they will continually run into issues with teams like the Rangers and the Boston Bruins. At the very least, they need to find another forward to get Danny Briere going.

Another simple solution may be giving less ice time to Marc-Andre Bourdon.  While he has been a good surprise this season, he is still a rookie and is being overexposed with 18:00+ of ice time.

At least we will always have proof that Flyers alumni trump Rangers alumni, even if it’s a shallow consolation prize.

Will Andy Reid Even Want To Return?

What Will Jeffrey Lurie Have To Say Today? Is Reid’s Job Safe?

From a Hockey Fan perspective, it was a very exciting game, though it didn’t end well for Flyers Fans, but to a National Audience was a great game and atmosphere and a reall success as was the ALumni Game the other day..

Lundqvist was outstanding tonight. He was the difference. BTW, it looked like that ice was like skating in quick sand!

Anyone thinking the Flyers regret signing “Bryz” to this long-term $50 Million Deal.. Not that he even played today, but you have the most watched Hockey game of the Regular Season on National TV and your #1 Goalie is not even playing.. I know Bryz has a 3.01 Golas Against Averga and a Save % of .890 ,which is horrible for an NHL Goalie.. How did this happen… When will teams learn that you don’t give long-term Contracts to Goalies (unless they are a proven Stud) and to Russian/Eastern European Players for they can’t handle the pressue that comes a long with it… Playing for Phoeniz Coyotes and the Philadelphia Flyers is 2 Different worlds, 2 Different types of PRessure and expectations.. What a Bust… 2011 is going down as the bust of Philly Free-agents with CB Asmo, Goalie Bryz and we’ll see how 2012 turns out with a $50 Million deal to CLoser Papelbon… Another crazy signing..

Paulman, the truth is that while Bryzgalov was an upgrade over Brian Boucher, the Flyers completely misread the goalie market in June. When one team signs a goalie to a $51 million contract for 9 years and the next largest contract is a 2 year, $2 million per year deal for Mike Smith, clearly they missed the mark.

How can a smart organization miss the Market Value that bad, that’s crazy and a real insult to fans to pay those ridiculous Game Ticket Prices to support these Franchises.. I am not a fan of giving big Contracts to Athletes and especially at such fickle positions like Goalies and espeically not to Russian/Eastern Eurpoean players.. This will hang around their necks like a great albatross for the next few Seasons…

Hey, we should be used to the Flyers misreading our goalie situation. The last good goalie we had was Hextall 1.0.

Bryz will be another in a long line of goalie disasters for this team. He reminds me alot of Roman Chechmanik. He let’s in alot of softies, & that will not fly well with Laviolette.

I don’t think Bryzgalov will be a “disaster.” I just think he was overpaid. Long-term contracts have rarely, if ever, worked out for any team.

To the Flyers’ credit, I still consider them a fairly well run organization. There are many more teams around the NHL that have run their respective franchises worse. They just thought Bryzgalov carried the Coyotes when it’s highly possible the Coyotes’ defense and coaching carried him.

The Flyers are a very well run organization, & always are in it, but they, for some reason, can’t pick the right goalies!

Sounds a lot like the Eagles if you ask me… and the Flyers always get to seem to get a Free Pass from local Media and the Fans… It’s Crazy..

The difference between the Flyers org and the Eagles are too many to count. 1) they have an owner who knows about the game and has been here from the beginning. 2) they have a GM who knows the game and can evaluate talent. 3) They keep their icons of their franchise close to the game and have them accessible to fans. 4) They make huge moves every season to try to win a cup. For the current team… they have a passionate coach who holds all of his players accountable and it willing to shake things to try for different results. They have a team that kills it every night for each other with no primadonna whiners who are only looking out for themselves. They appreciate the fans rather than turn against them. Holmgren traded the 2 star players of the team, because they needed a change. He turned them into high quality rookies and the team is still in the hunt for the first place in the East.

Is the Bryz signing a whiff? Seems like it so far. I am crossing my fingers that he will come around to where he was when he was with the Coyotes.

Should have said high quality rookies and young players like Simmonds and Voracek.

The Flyers get a pass from the fans because they handle failure differently than the Eagles. When the Flyers miss the mark with a player, they aren’t afraid to say it was a mistake and make another move. When the Flyers don’t like the direction that the team is going, they change coaches, trade stars, move on and its no big deal. The teams are similar in that they are always competitive and haven’t won anything in a long time. The difference is the Eagles won’t admit their mistakes and continue with the same failed formula year after year, garnering the same result. Both teams have yet to win a championship in the modern era, but I think the fans relate more to the manner in which the Flyers respond to that failure.

Sorry bugsyhawk- just posted basically the same thoughts as you-it must have posted as I was typing.

No worries Ever, I least I know that I am not the only one that feels that way about the Flyers.

Now, the games has changed over the years, and you aren’t going to see the Martin Brodeur types anymore, with multiple shutouts in a season, as the game goes too fast, and the offensive talent is too much.

But, you have to have a goalie who can come up big when the game is on the line…I mean BIG, stopping repeated shots and taking charge…Neither Bob nor Bryz have demonstrated this ability yet in Philadelphia…Could be a confidence thing which brings us to…

Peter Laviolette, who seems like a major flip-flopper with his goalies…The Flyers also need to tighten up around the net, and to keep track of their men.

Rangers seemed liked they swarmed their own net anytime a Flyer got near the NY goal.

I agree Frank, Coack Lava switches his Goalies way too often which erodes the Goalies Confidence when they feel they have to stop every shot or could be pulled..and soone or later, this lack of Confidence seeps into the rest of the Locker Room.. This Team is doomed and will finish the 4th Overall Seed and get knocked out in the 1st Round versus Buffalo or NJ Devils.. Same old, same old with this Franchise and I am tired of hearing how Great the Flyer Franchise is and what have they exactly won since 1974 … That’s right, nothing, zippo.. Ed Snider is always going to have one of his boys as the GM to run thinkgs (though it’s Snider in the background pulling the Strings) Just like Bob CLarke roved to be, Paul Holmgrem is not a competent GM in evaluatiing Talenm, Contract handling, and Player Development.. WHo oversees this for the Flyers and how come they have been unable to develop top notch Goalies and Defenseman ever since I can remember.. Is is that difficult to do…

“Who oversees this for the Flyers and how come they have been unable to develop top notch Goalies and Defenseman ever since I can remember.. Is is that difficult to do?…”

Yeah, I have the same questions…They spent big bucks on Pronger, and, while he hasn’t been a bust, he is always hurt…They need some tough home grown defensive players.

And goalies are always an enigma…Look at Thomas from the Bruins…He had a couple of so-so years for the Bruins, then he comes up REAL BIG in the playoffs last year…There just aren’t any Parents or Lindberghs around, so the Flyers need to settle on one of these guys as #1, let the other be #2, then they know they’re roles…Top team always need two good goalies anyway because of injuries.

But the defense needs to tighten up, play some kind of trap or better system when they jump out to a lead in big games…Easier said than done, I guess, because this Flyers team is very fast and can cause chaos when they free wheel offensively.

But defense needs more work, because that is what wins in playoffs…Cliche, but true.