Penn State: Outclassed, Out Coached and Out Played 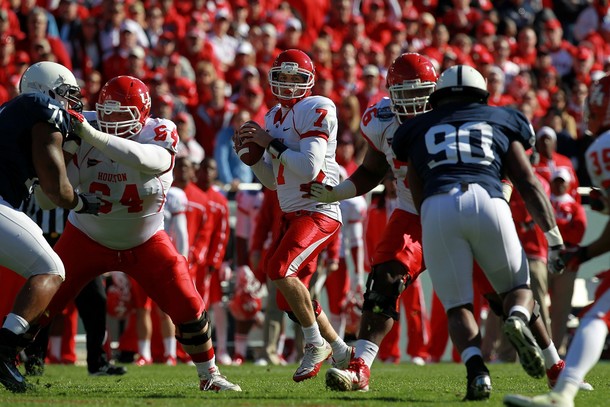 Former Head Coach of Penn State, Joe Paterno could not of been happy with what he was watching of his former team on Monday afternoon in Dallas.  Penn State was playing Houston in the Ticket City Bowl. The Nittany Lions had been by-passed

by other prominent bowls and some players wanted to by pass this bowl but the team decided to play it.  Well they probably should of just declined and had stayed home.

Houston totally dominated Penn State in beaten the NIttany Lions 30-14.  Penn State teams in the past under former head coach Paterno had the reputation of always being prepared and ready to play in a bowl game.

If you gave Joe Paterno a month to prepare for you he more times than not had his team ready and they had the answers.

Tom Bradley the interim head coach and a possible successor was completely outcoached and his team looked totally unprepared to answer Houston’s star quarterback Case Keenum.  The team just looked totally outclassed and were dominated early by Keenum and the rest of the offense of Houston.

The majority of the fans in the stands in Dallas were from Houston.  The total attendance for the TicketCity Bowl was 46,817 at the Cotton Bowl.  The crowd got to see Keenum surgically operate against the Penn State defense.

The star quarterback ended the day 45 of 69 with 532 yards passing and 3 touchdown passes.  A trying season had finally come to an end with this lose by Penn State and the future of the program still remains in question.

The University still has to decide on a new head coach to take over for a legend like Paterno.  Bradley is one of many who are being considered for the position.  The University has said there is a handful of possible successors and they hope to name someone soon especially with recruits having to commit to schools in a month.

The 24th ranked Nittany Lions were totally picked apart by Keenum who threw for over half of his passing yards in the first half.  The Houston signal caller beat the Penn State veteran secondary with touchdown passes of 45 and 70 yards and built a 24-7 halftime lead.

This bowl game marked the first time that Penn State played a bowl game without Joe Paterno since the 1962 Gator Bowl against Florida.

He hit Edwards again on a 75-yard touchdown pass putting Houston up 24-7 at halftime.

Penn State quarterback Rob Bolden connected with Justin Brown for a 69-yard touchdown pass to cut the Houston lead to 27-14 at 2:38 of the third quarter.  The Penn State defense did play better in the second half but it was too little too late.

The defense held the Houston offense to two field goals in the second half.  The early quick start by Houston was too much for Penn State to overcome.  Bolden finished the day 7 for 26 and 137 yards.  Running Back Stephfon Green had 15 carries for 63 yards.

This tragedy and controversy of a season has finally come to an end. The future of this program is to be decided soon.  Who will guide the football program at Penn State into the future. Whoever it is has huge shoes to fill in replacing a legend like Joe Paterno but someone is needed to restore order in State College.

Lurie Praised GM Howie Roseman, But What About His Poor Drafting

Good!!! I’m glad that scum of a college lost. They are the disgrace & scum of the earth. They don’t deserve anything good happen to them, until that institution is cleaned out top to bottom. I also want that whole disgraceful situation investigated by the Supreme Court, immediately. Rapes, molestations, pimping of juveniles, dead/ missing DA’s, missing of dire documents, cover-ups, crooked Politicians. It’s a series of horror/ drama novels. This can’t be brushed under the rug & not investigated by the courts, because Sandusky is being on trial. It must go further than that, & must be thoroughly investigated.

BTW, it’s so convenient now, that we don’t hear anything about it anymore. HMMMM, I wonder why!?

Also if I hear anymore of the violin players, trying to get sympathy for Joe-Pa, because he is sick, I’m going to puke the last weeks worth of food up. He can rot in hell for all I care. He knew everything & helped in the covered-up, & not helping all of those poor kids. F^#@ him & Penn State.

DCar….you’ve got some issues dude. I would agree that an investigation needs to be completed and anyone who in anyway participated in a coverup needs to be prosecuted, but the vast majority of people associated with the university had nothing to do with these horrible crimes, but the level of hate your throwing out there seems way out of place. And before your respond, I am NOT an alum of the school and have no association with it.

You will see a couple of Seasons where Penn State will struggle and not only lose games, but lose big.. I have always thought over the last few seasons that when playing against top Team, opposing Coaches took it easy on Penn State and didn’t want to embarras him and took the pedal off the metal later in game so as not to big them bad.. I look at recent big games where Alabama,Ohio State,Mich State,Wisconsin,Iowa over the flast few yer had comfortable leads over Penn State in the 2nd half and just kind of played the game out instead of going for more points.. Those days are over and now we will see teams beat them by larger margins and show no mercy for Penn State’s Talent level has dropped off so much the last few Seasons,..
I am not sure that many fans realize that in the last few seasons, there have been more players Drafted into the NFL from Temple and Rutgers, U Conn than there has been from Penn State which is sad statement on how far their talent has dropped.. .

Agree with you Paulman. The talent level on this team has been horrible since the Kerry Collins years. Sprinkle in Lavar Arrington(how the hell they got him) and this program is lucky to have had the minimal success they have had the last few years. Saying all that besides Notre Dame this program is the 2nd most supported team in America or atleast in the discussion with Alabama, Nebraska, Michigan and Ohio State. Get the right coach in here and every top player from Penn, Maryland and NJ along with every former players son, grandson and great grandson will come. lol Can you imagine a Steve Spurrier figure who would own this region up here?

GREEN, because I’m not afraid to speak my mind & speak the truth, doesn’t mean I have issues. What would you say, & how would you feel if someone close to you was abused, & then an entire sports department covered it up, & did nothing to stop it. My anger & hatred for this kind of $#!t, stems from someone very close to me being raped when she was young, causing her to kill herself, after her suppressed memories surfaced, & nobody believed her but me, & I was too late to save her. So forgive me for being human, having true emotions & having a heart. BTW, the majority of the public, with the balls to be real, agree with me. So go back to living in your f^#@ing box & criticise someone who deserves it.

At least we now know what your issue is. I don’t hear people defending the group that was involved in any coverup…and obviously you didn’t read my post…but clearly you have alot of anger and you are directing much of it at people who had nothing to do with Sandusky.

GREEN, maybe your right. BTW, nothing personal, just venting on the scum of this earth. I’m just a concerned family man, & Father of 4, who has been involved with upholding the law, security & protection of people for a long time. Pieces of crap like that, make you wish that vigilantes were legal. I might get overly passionate, but I speak what is on my mind & wear my heart on my sleeve, & that will never change, whether anyone likes it, or not.

no offense taken DCar….I’m a father of 4 also…very sorry to hear the story of your friend….there are special places in hell for the monsters who prey on our children