T.O. In GQ Mag Talking About His Battle With McNabb 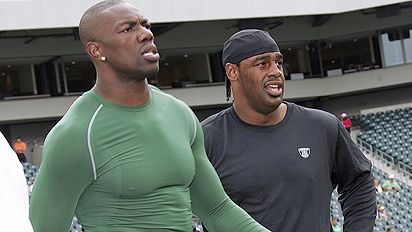 It looks like we’re going to go back through the Terrell Owens vs. Donovan McNabb nonsense.  According to Philly.com, GQ magazine is doing a story on Owens for the upcoming issue and former Eagles middle linebacker Jeremiah Trotter has a problem with the story Owens has told GQ.

According to the story on Philly.com, Trotter contends that Owens isn’t telling the truth.  Here’s the excerpt from the upcoming article.

“Some of the things in Philadelphia.” He sits back in his chair, seeming to catalog the events in his head: proclaiming that he didn’t care what fans thought of him, the locker-room tussle with his teammate Hugh Douglas, the various flare-ups with Donovan McNabb. But definitely not his attempt to renegotiate his $49 million, heavily back-loaded contract. “I was not paid competitively, and that was that,” he says. “The teams talk about how we should keep to our end of the bargain, but then they dump you at the point at which you’d actually start earning out, and that is supposed to be okay. Why don’t they need to keep up their end?”

How about the decision not to publicly apologize to McNabb for suggesting in an interview immediately after the Eagles lost the Super Bowl that the quarterback had “got tired” on the field? For a moment, he is silent. Could he actually be on the verge of admitting he made an error?

“Well, I probably should have done…,” he begins, rubbing his hand along the contours of his massive shaved dome. Then he stops himself. “No. No. Listen, I was in the locker room before the press conference, and my team captain, Jeremiah Trotter, read through that apology they wrote for me. He got to the bottom part, the part where it had the stuff about Donovan, and he did this.” Owens snatches a piece of paper from the table and rips off the bottom three inches. “This is the team leader we’re talking about; he told me not to do it.”

His only real mistake, Owens insists, was “timing. I might not have said or done things at exactly the right moment” (though it’s hard to imagine the right time to publicly dis your QB). He concedes, after some prodding, that he lacks an essential social skill that has cost him. “I am not,” he says, “a tactful person.”

A Quick Look Around The Sportsworld On Thursday January 19

Who cares! Go away, & take D-Mac with you. Both are whining media whores!

Mr. Cobb, this article should not have even been posted. That’s irrelevant old news… move on!

Yeah G, I just left that mess at NFL.com a minute ago to come here and get some real news; not to see that same crap over here. In the words of keyshawn Johnson “COME ON MAN”!

Paulman doesn’t even have any thoughts anymore on this Topic.. Good Grief G..

As always history is the best teacher of humans lives. Both failed at being champions. One is unemployed and the other is auditioning for NFL Network..just about they way i figured it would wind up.