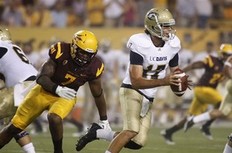 It is official Draft Season in the NFL!!!  The deadline for underclassmen has passed.  The first All Star/Scouting even, the East-West Shrine Game, will be played Saturday afternoon in St. Petersburg, FL.

How will the Philadelphia Eagles approach the NFL Draft this year?  There have been several questionable picks in recent years that have caused fans to lose trust in the front offices player evaluation.

The various draft day head scratchers are too numerous to list, so I’m going to keep looking towards the future.  The Eagles currently have ten draft picks (1st round-1; 2nd round-2; 3rd round-1; 4th round-2; 5th round-1; 6th round-3)

I have put together a mini-mock draft based the Eagles current picks.  Of course, this is by default.  The 2012 NFL season still has to start, allowing player/draft pick trades and free agent signings.  The NFL Combine will be certain to cause changes to various teams draft boards.  At the end of March, compensatory picks will be announced which will shuffle the draft order.

With Another Jagr Injury, Should Wellwood Get a Call-Up?

Thisdraft looks pretty good, I’m not sure Burfict lasts until the Eagles second pick though. He is this years Jimmy Smith who was believed would slip to the second round due to his attitude and immature antics. The Ravens snapped him up with pick 26 in the first round. If Burfict is the guy, which I hope he is, the Eagles should select him first in my opinion. I think linebacker is a greater area of need and needs to be addressed first.

Good Stuff Haran… I love the Mark Barron pick myself in the 1st Round and there are couple of other teams that really like him too with their 1st pick (Cowboys (#14) & Jets #16) . Also grabbing a MLB is a huge need too and especially with Starter Jamar Cheney just having neck surgery last week so who knows how he recuperates from that.. Fyi, MLB Vontae Burfict has now dropped down to a Projected 3rd Round Selection by NFL DraftScouts.Com for his Character,Maturity and Coachability issues…
Here’s Paulmans’ Mock Draft and I am going to assume that the Eagles will re-sign 4 of their own Free-Agents in WR D-Jax, LG Mathis and DT’s Dixon & Landri which of course is not a given..

Some possible Trade Scenarios could be the Eagles trading CB Samuel,
OT W Justice or DE D Tapp for more Draft picks or maybe in a package with a Draft pick to move up …
3 Teams have 2 1st Round Selections – Cleveland Browns,Cincinnati Bengals and the NE Patriots
A Team like the Browns who have the 4th & 22nd PIck in the 1st Round and could really use a CB like Samuel could be a good trade partner (maybe the Eagles can offer Samuel and their 2nd Rd Pick (#47) picks for their 22nd Selection to have a shot at MLB Donte Hightower

Haran, I love your draft but it seems a little too “Pie in the Sky”. Burfict in the 2nd round, I think, will never happen. No matter what draftscouts.com says. Paulman, would we be moving Ronnell Lewis to MLB in your draft? If not, that’s a No-Go.

I think the Eagles will really address their MLB thru Free-Agency with some good ones out there like Steve Tulloch from the Lions, Larry Grant & Ahmad Brooks from the 49ers,Dan Conner from the PAnthers, D’Qwell Jackson from the Browns and EJ HEnderson from the Vikings..

As a certified NFL draft geek I think it’s important to understand that every year players are projected to get picked in specific rounds. Every year players that are slotted for the first falls to the second or third and vise versa. It just takes one team to draft a player in a different round than they were projected to go. The Eagles do it every year, whether they are reaching for a player or taking a player projected to go higher than the Eagles drafted the player. I will not base my Eagles mock draft off of where someone tells me the player should get picked, I base it off of team need and how that players talent will fit into the teams scheme. No way does Burfict fall to the third round unless he physically hurts himself, totally blows off team interviews at the combine, or does something else incredibly stupid between the combine and the draft.

Haran, I like your thinking, but they WILL NOT waste a 1st rounder on a safety, with dire need at the LB core. I doubt Vontaze Burfict lasts to our 2nd rounders. Especially if he blows up at the East/ West Shrine game & the combine.

I agree Eagleshand and a good premise to start is just that, but rankings are rankings. and the lists have to start somewhere .. NFLDraftScout.com had Burfitc slotted at the #87 Overall Player which is a late 3rd Rounder when there are 32 players to a Round which doesn’t mean boo.. But Burfict was gone from #21 to #30 to #44 to #65 to now at #87 over the last 4-6 weeks by DraftScouts.Com so there may be other issues that we don’t know about
As of now, I think that Burfict will be the 3 MLB Taken and be Slected in the 2nd Round beween the 35th they 45th Selections.. When you look around the NFL, not many teams need a MLB and ILB’s tend to rank lower on everybody’s boards where QB/DE/CB/OT always rank higher…
Take a look at the QB Class now that M Barkely & L Jones decided to go back for their Senior Season.. This has allowed the 2nd Tier QB’s like N Foles, B Osweiler, Weedum,B Ridgley, K Cousins who were all thought as 3rd/4th Selections to probably now go in the 2nd and 3rd Rounds since teams that need QB will take their chances on someone..

Who cares . With Reid and Howies drafts and then with our silly coaching staff does it really matter. Cant even get excited for the off season with this team. Its a joke. BTW if Giants win Super Bowl here are the facts:
Cowboys 5 rings
Giants 4 rings
Skins 3
Eagles a big fat 0

and the Front Office Groupies on this site are Ok with that as long as Reid is the coach.

I would love this draft, specifically because Jarius Wright allows you to let DJax walk or you can trade him….he is built like DJax and has 4.3 speed. I see him moving up draft day to late round 2.

Burfict is not a 1st round pick…he has 1st round talent, but he has character and anger questions that will cause teams to drill into when evaluating him….he is Trotter but more speed and upside….

Barron is a stud….the guy reminds me of former Cowboy Darren Woodson….he will run a 4.6 but his overall skills are too good to pass up….he gives the Eagles a SS for the next decade….Jarrett and Coleman are not starters.

I really like Thompson out of Clemson….he is a big body that can get to the QB….he didnt put up big sack numbers at Clemson but he applied constant pressure in the pocket…. perfect guy to rotate in and eventually start by year 2…

Nice angle Haran.Paul saw the S.C. guy play a few times and like his toughness.Myabe they dont make another mistake like Lindley.

Linebackers will look great with either the Sooner or V.B…they do need to target a defender with a championship pedigree and able to make some clutch plays early in a season. We’ll have agreat mix of vets,3rd year pros,and rooks. Similiar to the GMEN.

Id go wideout on offense instead of tailback. Mccoy and Lewis can handle things next year .Late rounds look for a mudder.Be interesting to see how the next o-cords ideas blend with Walrus’s pass-addiction.

Niners…probably the toughest and most well balanced d leftt.Willis will hold up against any run threat and the ground will be a lil soft. Look for Gore to explode. Giants on a late rally that ends a few points shy.Niners 24 Gmen 14

Pats….Tomkat evenges his demons gainst the Purple Birds and makes enough throws to beat that secondary. This game is about Flacco and what he does in big moments. I believe the Pats d plays well and stuffs the Ravens run.Wilfork has been back to A.P. level.Mayo is a budding A.P. and they’ll just scheme enough to plug it.Ravens 21 Pats 31

To Jott & Haran,..
Jarius Wright is a very good prospect and WR but listed at 5-10 – 180lbs ..but I like he teammate Joe Adams, who I think has better upside for the NFL.. Adams is bigger at 5-11 190 and runs a 4,38 while J Wright runs a 4.32… I like Adams for he is a full-time Returnman too.. He scored 5 TD’s returning Punts and is explosive and not afraid of contact..He caught 175 Passes to Wrights 200 Passes during their Arkansas Career’s but Adams had more TD’s and also more yards rushing due to getting the ball on end arounds..
I picture Adams to be able to play in the slot and reminds me of a WR Percy Harvin type that is stronger, tougher receiver than meets the eye and is more that just a fast,track type of WR like Wright is..

THEY ARE NOT DRAFTING A SAFETY IN THE 1ST ROUND!!! QUIT IT ALREADY!!!

Guys…we complain after the draft ever year. Nothing will change with andy here.