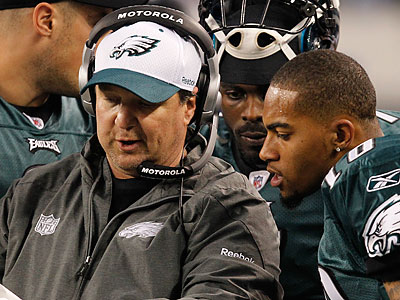 Philly.com’s Jeff McLane repotts that Eagles offensive coordinator Marty Mornhinweg was interviewed by the the Oakland Raiders for their vacant head coaching position.  He completed the interview and left Oakland.

The report said that the Raiders had interviewed a number of candidates before Mornhinweg and are looking for more candidate to interview.  Former Green Bay Packers Director of Player Personnel Reggie McKenzie is the current GM of the Raiders and he’s the main person conducting the search.

McKenzie is the twin brother of Raleigh McKenzie who played the great Hogs offensive line which led the Redskins to three Super Bowls.  The outstanding guard also played for the Eagles under Ray Rhodes.