Giants On The Doorstep Again, Thanks To The Eagles 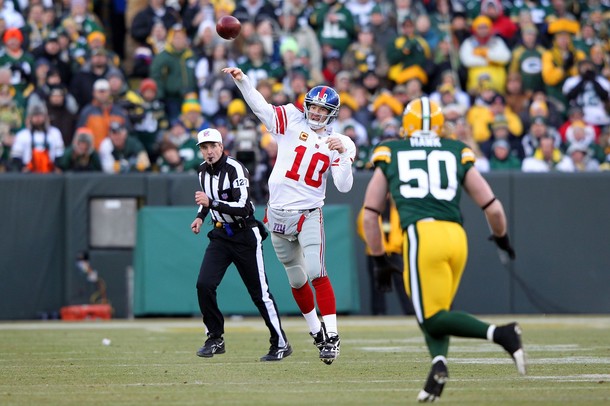 The New York Giants have always been one of the classiest franchises in football. Between the Mara and Tisch families, the team has been owned by quality human beings who care about their players, coaches, and fans. The front office of the team is led by another top notch guy in general manager Jerry Reese.

We as Eagles fans hate the Giants because we are supposed to, but I guarantee most of us would switch ownership and front office with them in a heartbeat. That being said, if the Giants do end up winning their second Super Bowl in five seasons, the powers that be should honor the one guy outside the organization who’s made it all possible: Andrew Walter Reid.  That’s right.

Reid has definitely had a hand in what could very soon end up being a mini-dynasty. In 2007, the Eagles head coach went into the season deciding the Eagles would be fine with Greg Lewis returning punts. Two fumbles later, the Eagles lost on opening day to the Packers and never quite recovered. The team finished the season 8-8 and allowed the Giants to win the Wild Card. The Lewis fiasco wasn’t the only thing that held the Birds back that year.

They were a preseason Super Bowl favorite (as the Gold Standard, aren’t they always?), but the usual poor play calling and time management marred them and deflated any chance at making the playoffs. The Giants, as we all know by now, made the playoffs, won three games on the road, and shocked the undefeated Patriots in the big game. This year was even worse.

The Eagles were easily the favorite to represent the NFC in Indianapolis (again, aren’t they always?) but once again played well below expectations and finished 8-8. If they don’t blow a 20-point second half lead at home against San Francisco, or let Joe Montana, err I mean John Skelton beat them in the fourth quarter (again at home), none of this is even being discussed right now. They would have won what was thought to be a brutally weak NFC East and the Giants would be playing golf. But as is usually the case with an Andy Reid led team, it didn’t pan out that way.

So as the Giants travel to San Francisco this weekend, they are on the verge of yet another miracle. New York is a very talented team, and if they do win it all (which I actually expect them to do), it will be well deserved. But this team better realize they had help to get where they are. That help materialized in the shape of a man who has fire in his belly. Giant fans, do yourselves a favor and thank the man who helped make it all possible. Andy, take a bow.

-If the Giants win Super Bowl XLVI, Eli Manning will have cemented himself as an absolute lock to make the Hall of Fame. I can’t believe I just wrote that last sentence without throwing up, but it’s true. A New York win would give Peyton’s little brother two championships in five years and a reputation as winner who just happens to play in the biggest city in the world.

Prior to 2007, Eagles fans could count on two things: Andy Reid singlehandedly destroying their aspirations of attending a parade, and Eli choking when the game mattered most. No longer can we refer to him as “her” or “Sheli” or any other of the pet names that Manning earned early in his career. Nope, if he wins two games within the next three weeks, he will go down as an elite quarterback who, rightfully so, will have a place in Canton.  Again, Andy Reid deserves some credit for this. I need a drink.

-When watching the NFC Championship game this Sunday, think back to Week 4 as the game that ultimately made this matchup possible. The Eagles were easily beating the 49ers, leading 23-3 in the second half. No one needs a history lesson to recall the huge collapse that led to San Fran squeaking out a 24-23 victory. The Niners win catapulted them to what wound up being a wildly successful 13-3 season. The week before they traveled the Philly, Jim Harbaugh’s team played in Cincinnati and beat the Bengals.

Instead of flying back home to prepare for the Eagles, the rookie head coach kept his team in Ohio as a way to build chemistry. When San Francisco came back to beat the Eagles, they bought in to what Harbaugh was selling and now are on the doorstep of their first Super Bowl appearance in 17 years. Meanwhile, if the Eagles don’t blow that 20-point lead, they would have finished the season 9-7 and won the division. I think about this kind of stuff as I cry myself to sleep at night.

-Steve Spagnuolo absolutely made the right decision in signing on as the Saints new defensive coordinator. Now he gets to go work for a team that’s already won a Super Bowl and boasts one of the most potent offenses in the NFL. Turning that defense around and possibly winning another title will be just what Spags needs to capture another chance at a head coaching gig in the future. I don’t blame him one bit for not wanting to come back to this debacle. Looks like another Juan-derful year on the horizon.

Is It Time For a Line Change?