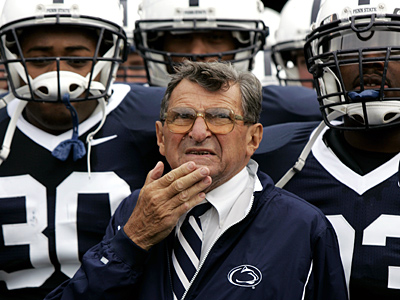 Penn State head coach Joe Paterno was unfairly judged. He went to his grave with a broken heart. Some say he was an ego maniac. News Flash: To be the best at what you do you need that ego. Those who say it lonely at the top mean that you always need to find your own source of inspiration.

That Ego , who knows how many people’s lives he changed in a positive way. He lived like the most modest of men, donating his fortune and time for the advancement of others. True leaders bring everyone up as he did. When you are responsible for other’s success, or when many look to you for the answers, life is viewed much differently.

Could he perhaps of done more with the Sandusky’s incident ? Of course but he did report the crime. To judge the man on this one incident and not by his lifetime of selfless work is just a foolish way to look at him.  He not only cared about others he gave the majority of what his celebrity earned him away.

I was only in his company one time but it was like royalty was in the room. I didn’t know him like some did. But I grew up idolizing both he and the Penn State program. He made no secret of why he held on to the coaching position as long as he did. He said he did not want to end up like Coach Bryant did at Alabama dying shortly after he retired. Like coach Bryant he had nothing else. This was his life.

The board  stripped him of his dignity by fed’ Xing him a phone number to dial into where some coward told him over the phone he was fired. And to say he must have known coach Sandusky was a monster again just shows ignorance. Two years ago I coached with a monster. A child Molester. I spent sometimes 12 hours a day with this guy. Until the day he was caught, I had no idea. So I’ve been through the same situation first hand. And looking back there were no signs.

So when Coach Paterno said he had no clue, I believe him. The man who built not only the program ,but the school, was cast aside and left on the side of the road for dead. So the 2nd love of his life, who he gave 61 years of his life to, threw him away like garbage. And he couldn’t recover from that. Coach Paterno is and always will be a legend. He was Penn State. Rest in peace Coach. Thanks for being one of the primary reasons I love the game as much as I do. You will be missed.

Flyers Battle Hard Against Bruins but Fall in Shootout 6-5