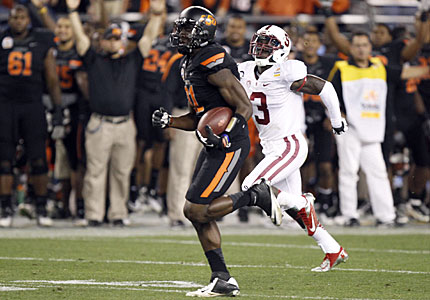 As far as the draft goes according to ESPN’s current mock draft 4 wide receivers are projected to go in the first round. I highly suggest the Eagles wait until later in the draft to use a pick on a wide receiver if they decide to draft one because clearly other needs exist on the defensive side of the ball which should be addressed using those early picks.

If they do choose to ignore those needs and draft a wide receiver early the top 4 receivers currently on the board are Justin Blackmon from Oklahoma State projected to go at number 8, Michael Floyd out of Notre Dame projected at pick 18, Alshon Jeffrey out of South Carolina projected at 23, and Kendal Wright out of Baylor at pick number 32.

Blackmon is without a doubt the most explosive of the group coming in at 6-1, 215 pounds but would be a stretch for the Eagles to grab. If for some reason he falls into the mid first round and is available for the Eagles it might be tough to pass up on him.

His style of play has been compared to T.O during his prime as he possesses a combination of size, strength, and athletic ability that overwhelms defenders. He even wears number 81 at Oklahoma State and truly resembles another T.O. out on the field. It’s been said that Oklahoma coaches believe his skills are more advanced at his current stage than Dez Bryant’s were at this stage so without a doubt if all goes according to plan Blackmon will be making a name for himself in the NFL.

Michael Floyd, coming in at 6-3, 224 pounds could be available for the Eagles and according to scouts might be the best pass catcher available since Larry Fitzgerald. He has great balls skills and has a knack for making a tough catch look routine. Questions have been asked about his top end speed but most believe his catching ability outmatches any of those questions.

Alshon Jeffrey is considered a jump ball specialist. As I said earlier, one thing even with DeSean back the Eagles should consider is a big red zone presence at wide receiver and this guy could be the answer. He’s 6-4, 229 pounds and has already been compared to a Plaxico Burress type of playmaker. He currently lacks top end speed but has the size and strength to be a force in the red zone. If the Eagles can grab Jeffrey and resign DeSean both of them along with Jeremly Maclin could prove to be one of the greatest Eagle wide receiving cores ever for years to come with each of them being so young.

Kendall Wright is more of a DeSean Jackson type of receiver and could prove to be a cheap replacement for DeSean and may be able to pick up right where Jackson left off. Wright is 5-10 and 190 pounds so he has some weight on DeSean but not much. Wright has scouts all over the place talking about his extraordinary speed. He still remains unpolished as a route runner but with some work he has the opportunity to blossom into something special in the NFL and lets face it you can never have enough speed on the offense. He just came off a season at Baylor where he played with Heisman winner Robert Griffin III. Griffin has a similar style of play to Mike Vick so it could be a perfect fit for him to end up in the Eagles offense with Vick being he already has that experience of playing with a running quarterback.

The Eagles wide receivers are in good shape heading into 2012 and the team clearly has options if they decide to let DeSean walk. Both the free agency field and draft class have some outstanding talent that can help make this group even better. Only time will tell how things shake out for this group but it all will rest on the outcome of DeSean Jackson’s free agency. With that said we might need to get ourselves familiar with some of the names I mentioned above because one of them very well could be suiting up in Eagle green next season.