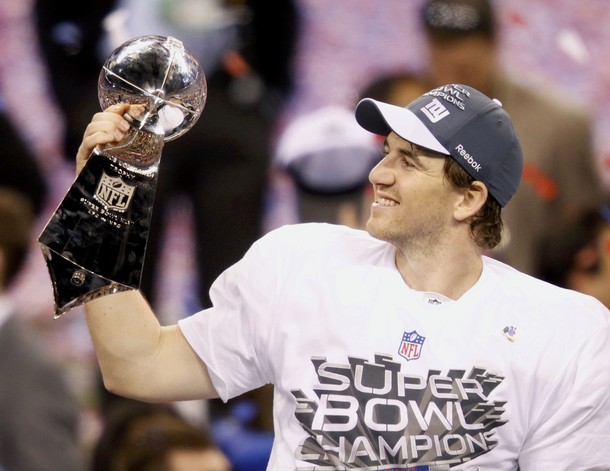 The door was open for the Patriots but Tom Brady couldn’t get the ball to a wide open Wes Welker.  Welker got two hands on the football but couldn’t bring it in.

The Giants Eli Manning on the other hand made all the throws.  That throw by Manning and the catch by Mario Manningham was perfection.  Here the game was on the line and you had Manning and Manningham making the great throw and the great catch, but Brady and Welker weren’t able to get it done.

Brady is a great quarterback but you can see, he gets rattled by a tough pass rush  Manning on the other hand, never seemed to be rattled.  You must give Eli credit, he’s headed to the Hall of Fame, if he continues to put up numbers in his career.  He doesn’t need any more championships, he just needs numbers.  Eli is virtually in right now.

I thought the New England offensive line did a great job on the New York defensive front.  The Giants big fellas were coming with everything they had, but the Patriots offensive line gave Brady the time to get it done, but he couldn’t.

It was a good game which came down to the end.  The best team won eventhough I didn’t think the Giants played their best football, but Eli bailed them out in the end.

Superbowl XLVI Should Be Remembered As “The Mediocre Bowl”

The Drop Pass by Welker with about 10 minutes left in the 4th really was a big play and the Pats seem to struggle on Offense afterwards.. I think it was 17-15 and if Welker makes that catch or Brady makes a better pass, it could have been Pats 24-15 amd a 2 Score Game and who knows what happens.. but instead, Welker drops the ball, the Pats have to punt changing the Field Position..

p-man he dropped one with 5miutes left also ! which with another 1st down or 2 i think coulda almost killed the clock . giants only had 1 timeout left . the pats controlled the game at that point and then threw 2 incoplete passes, you cant give the giants the ball at that point

Trivia Question….Fill in the Blanks. On the left is how many Super Bowls were won by a team in the division.
5
4
3
0
Can anyone name the team with the 0?

0 SBs and one coach ,who will remain nameless, had 14 yrs to do it

can u believe in this PASSING LEAGUE, giants rushed 27 times……ANdy’s last playoff game(a loss) ………we rushed like 11 times