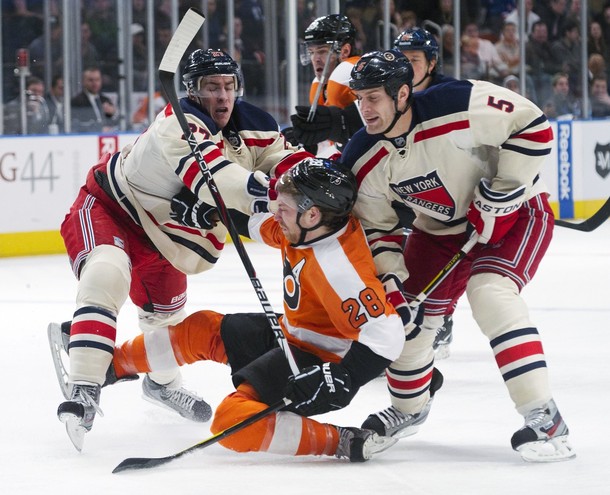 There was hope this afternoon that some of the lingering offensive pressure from yesterday’s third period against the New Jersey Devils would carry over to today’s tilt against the New York Rangers. Unfortunately, the Flyers collectively could once again not produce a solid sixty minute effort, as the Rangers once again rolled by them by the tune of 5-2.

In what’s become all too familiar a pattern, the Rangers scored just 1:04 into the game. Defenseman Dan Girardi took a shot from the blue-line that was deflected by Artem Anisimov past Ilya Bryzgalov.

Brayden Schenn tied the game halfway through the first period, jumping out of the penalty box (from a ridiculous slashing call by the officials) and collecting a well-placed outlet pass from Jake Voracek that he would put past Henrik Lundqvist on the ensuing breakaway.

The team was all set to end the period when Bryzgalov, who had played very well up to that point, tried to poke-check the puck past Marian Gaborik. Gaborik tossed the puck under Bryzgalov’s arm and it trickled in.

Wayne Simmonds tied the game again on a powerplay at the beginning of the second period. The momentum didn’t last long, as Michael Del Zotto was allowed to skate into the Flyers’ zone on his own and took the lead for a third time. It wasn’t a “soft” goal, but it was one that Sean Couturier should never have been out of position to stop and Bryzgalov could have been better prepared for.

A 3-2 deficit is manageable, but Matt Carle single-handedly ended any comeback attempt after making a poor pass in the defensize zone right onto the stick of Brandon Prust. Prust fed the puck back to Brandon Dubinsky, a player who has become largely irrelevant this season, and Dubi beat Bryz clean.

Ruslan Fedotenko finished the game off with an empty net goal.

There aren’t many positives to take away from the loss. The passing was poor, the physical play was spotty and a number of players fanned on wide open shots. You aren’t going to get many opportunities on Lundqvist and it’s critical to make the best of them in the moments when he’s out of position.

Zac Rinaldo had a decent game, drawing two penalties before taking a weak one of his own. Tom Sestito, on the other hand, got into three fights, the third in which he resorted to pulling hair. I don’t think Sestito realized that three fights is an automatic game misconduct, as he put the team at a disadvantage by letting Prust goad him into a third scrap.

Bryzgalov was not the reason the Flyers lost, but he didn’t do them any favors either. He stopped 33 of 37 shots from the Rangers, who were buzzing the net much more often and early than the Flyers.

The Flyers have not had back-to-back losses since December 27. They have also not strung back-to-back wins since January 12 against the New York Islanders, who they play on Tuesday.

If Bryzgalov doesn’t get the start, then I don’t see how they earn his trust down the road.