Temple Wins 6th Straight; Takes Over 1st Place In The A-10 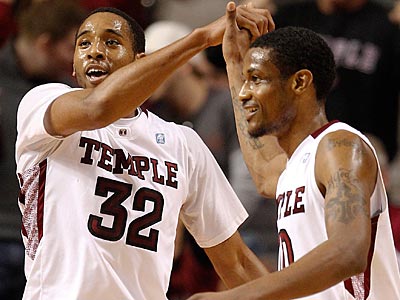 Temple senior Michael Eric made his first start since injuring his knee in November, Eric finished with 4 points and 5 rebounds.  Temple had three players reach double digits in scoring including sophomore guard Aaron Brown’s 15 points off the bench. The win marks the 5th consecutive game Temple has won by double digits.

The Owls were considered a number nine seed in the NCAA Tournament at the start of the week by ESPN’s Joe Lunardi.  Temple’s two double digit wins this week should cause the Owls to move up in tournament seeding, but do not expect them to land a spot in the top 25. Despite wins over Duke and Maryland and an RPI rank of 16, Temple received zero votes in last week’s AP top 25 poll.

The Owls return home to the Liacouras Center for a two game home stand which includes George Washington this Wednesday and a nationally televised ESPN game against Xavier Saturday, February 11th.

At This Point, Trading Of Carter And Richards Was Good Move