Sixers: No Need For A Trade Yet, Let Them Grow 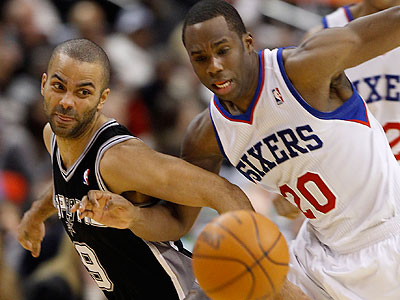 As I am watching the Sixers lose to the Spurs 100-90 in a ugly game, Parker went off. Point guards going off seems to be a theme in Sixers losses this year, Parker, Miller and D-Will. As I am sitting watching the game I’m thinking about how people keep telling me the Sixers need to make a trade. Why the rush? Let this team develop. No need to break these guys up yet.

They keep on bringing up Dwight Howard and Paul Peirce. They were thinking Peirce before the Celtics started to play well again. So I will use him as an example. Obviously, the first thought that crosses my mind is what they would want in return for him. Are the Celtics willing to take Iguodala? If the Celtics want to rebuild it does not make sense for them to take “Iggy” and his contract on. If they are going to rebuild the Celtics are most likely going to want Evan Turner, Thad Young and maybe a pick or another player.

Are you willing to sacrifice the future to try to win now? Would Pierce put the Sixers over the top? Can they beat the Bulls and Heat with him? Pierce is just getting back from injury and has played well since being back. He was just named Eastern Conference player of the week. Thanks for making me look like a jackass, Paul. Maybe he does have something left but he is 34 years old.

He is everything that the Sixers are looking for. He is a pure scorer. He is a guy they can give the ball to finish games. He can score from anywhere on the floor. He is tough as nails and he has always been good in clutch situations. The main thing is that he is a 34-year old aging star. All honesty I do not think he can still play at a high level every night like he once did.

Say, they do trade ‘Iggy” for Pierce. Paul will only hurt the development of Turner and Holiday. He is a guy who needs the ball in his hands. I am not against trading “Iggy” just not right now for an aging 34 year old Paul Pierce with a couple of more years left on his contract after this season. NOPE. Sorry peeps. Two years ago I would be screaming to get this deal done. It’s different now.

Well, I used to say that I would trade for Howard in a heart beat. I would at least think about not trading for him now and here is why. Howard being 26 years old and in his prime of his career is likely to be a free-agent at season’s end because he has a player option. The Magic most likely are going to want Thad, Lou and Turner. Maybe you take Turner out and put “Iggy” in the equation or they might want even Holiday.

The more and more I think about it I really do not know if I do that. Does Howard sign an extension with us? We could be just renting him for 3 months. I say just let this season ride out. Keep letting this team grow and see how far they get. This is all about the process of a growing team. You draft players to watch them develop then you decide who stays and who goes. This team is still in the process.

Let’s just enjoy the ride and when the season ends then we can figure out what move or moves to make to get to the next level. Remember Sixers should have money to play with at the end of the season according HoopsHype.com. Maybe if the Sixers win a round in the playoffs that could help free-agents decide this is a place where they want to be. Philly is a top 5 market and has a rich basketball history. All it takes one guy to think that and things can change, just ask the Phillies about that. This team is young and growing.

Listen, the bottom line to me is that you do not trade young talent for an aging star or just a rental player. Some people might think that I am insane for this post. Well, maybe just a little.. It is all good though as long as we are talking Sixers. That is all I care about. By the way, how bad was the officiating in the game? Seemed like Violet Palmer had a personal vendetta or maybe it was that time of the month for her. Just saying…

Howard Eskin: Plaxico Burress Wants To Play For The Eagles