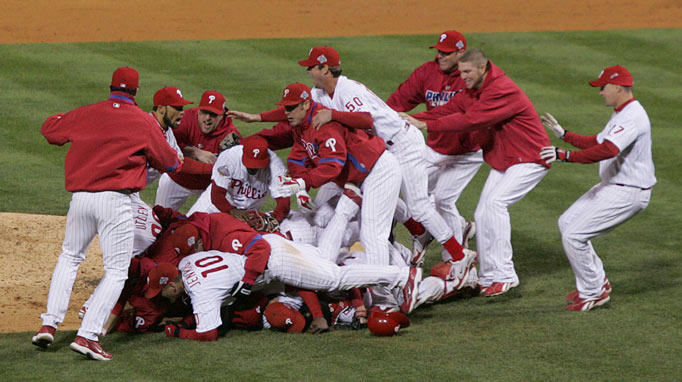 Wow, has this city’s baseball team changed in the last decade. I don’t think the baseball fans ever stopped being baseball fans. But the fact that the atmosphere at Citizens Bank Park, with an influx of younger generations, is a party atmosphere and shows that this fan base loves a good team. And the Phillies won the 2008 World Series, and they’re still reaping the benefits of their fan base four years later.

The Phillies clearly were a low-budget team back in the 1990’s and early 2000’s. But now, their fan base is showing them how we treat winners. Yesterday, the Phillies put single-game tickets on sale, and only sold 70,000 of them. So far for the 2012 season, 3.1 million tickets have been sold. That’s ridiculous. Not normal. Crazy.

Of course in New York and Boston, baseball tickets are ridiculously expensive. They’re still affordable in Philadelphia, and we’re going to continue to fund the Phillies’ payroll as long as they continue to try to put out a winner year after year.

It’s kind of funny when you think about it. The Phillies won the World Series with a less-talented team then they’ve had the past three years. Isn’t that baseball? Seems like the most talented team barely wins anymore. This offseason, the Phillies didn’t go after the biggest free agents. They cleaned up their bullpen and their bench. Those moves were necessary. I think this team is better than the last two years’ teams. Obviously we’ll see how it plays out. But we’re talking about baseball in February. The Phillies report to spring training next week. We’re excited. For baseball. In February.

Yeah, this baseball team deserves it. Number one on Yahoo!’s trending topics. Shows you all you need to know.