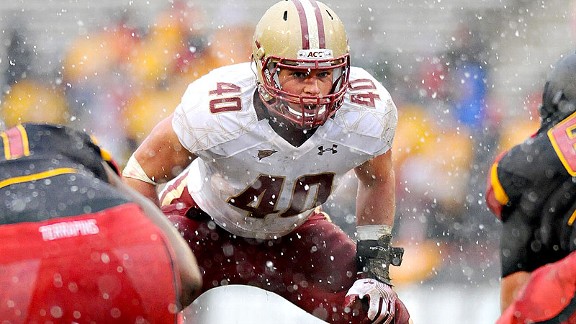 Philadelphia Eagles head coach Andy Reid will be coming back for his 14th season as the Eagles head coach.  The 2012 NFL Draft in April will be the most important draft of Reid’s regime.  It all begins this coming weekend when Reid, coaches, and scouts go out to Indianapolis for the NFL Scouting Combines which will be occurring this weekend.

NFL teams and good ones usually build, rebuild, and fill needs with the NFL draft.  The Philadelphia Eagles under Andy Reid has not had the best draft picks and the 2012 draft will be the most important during Reid’s tenure in Philadelphia.  The Eagles need to produce more starters who can step right in and play for the team right away.

The Philadelphia Eagles have needs that they will need to take care of in this up-coming draft.  Looking first at the linebacker position the most and than the defensive back position.  This draft is really loaded with defensive tackles and also with guys, who can play the quick defensive end position.

The Eagles should be looking for defensive backs and especially if they are not going to sign cornerback Asante Samuel.  Looking at the cornerbacks on the board you have Morris Claiborne (LSU), Janoris Jenkins (North Alabama), Drek Kirkpatrick (Alabama), Alfonzo Dennard (Nebraska), and Chase Minnifield (Virginia) are the top five rated at this position.

All but Claiborne should be there when the Eagles pick number 15 but look for the Eagles to take a linebacker in the first round.  There is depth at cornerback so they could take one in the second or third round.

Luke Kuechly, LB ( Boston College), Vontaze Burfict, LB (Arizona State), and Dont’a Hightower, LB ( Alabama).  Kuechly is the best of the bunch and is NFL ready. He may not be there at the 15th pick but if he is the Eagles need to grab him.  He makes great reads and he sheds off blockers very well.  He has very strong instincts and athleticism.

He did lead the nation in tackles the last two seasons.  He is very good against the run and the pass.  Courtney Upshaw was a member of the National Championship, Alabama squad, where the players are already well coached and prepared for the NFL.  He showed improved pass rushing skills and could convert to OLB in the right defensive scheme.  He uses his hands well and fights off blocks very well

It is so very important that the coaches and the scouts in the Philadelphia Eagles staff get this draft right and as close to perfect as possible because they need to have guys especially at linebacker who can come in and start at the NFL level.  This is when a good scouting department needs to show itself.

It all begins this weekend at the NFL Scouting Combine in Indianapolis.