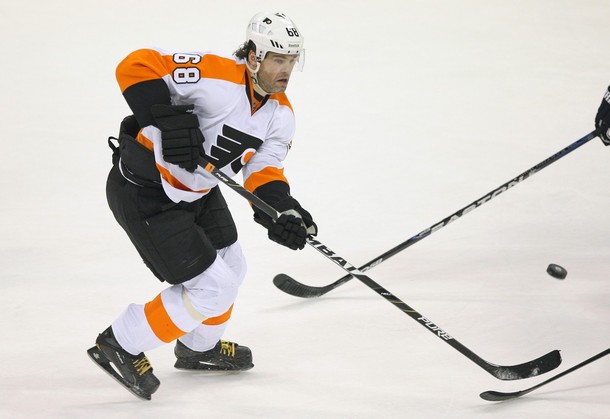 Tuesday night the Flyers won a thriller in Winnipeg Manitoba when they defeated the Jets in overtime in one of the wildest hockey games in recent memory by a score of 5-4 . The win was good and hopefully will kick start this team to getting back on a long winning streak. The problem is it should have never been close to begin with but with Ilyia Bryzgalov in net it’s obvious no game will come easy for the Flyers the rest of the way.

Bryzgalov is single handedly finding ways to sabotage what could be a great season for the Flyers. I could easily sit here and rip him apart for another lousy performance against the Jets but the guys in front bailed him out tonight in a major way. It’s pretty evident the Flyers are playing against two opponents every night the rest of the way. The first opponent is the opposing team and the second is Bryzgalov in net. Tonight we saw a Flyers team that wouldn’t give up and knew how important 2 points were in the standings.

The grit and determination we saw on the ice tonight was in large part due to the veteran leadership on this squad and one veteran in particular in my opinion hasn’t been celebrated as much as we should be celebrating him this season and that guy is Jaromir Jagr. Jagr scored the game winner in overtime against the Jets on Tuesday. He scored two goals against one of his former teams the Penguins in his first game back from sickness the game before. Jagr when healthy has been an absolute thrill to watch in orange and black and it’s a shame he couldn’t find his way to Philadelphia sooner in his career.

At 40 years of age Jagr is still playing at a high level in the NHL after playing in Russia for the past two seasons since leaving the rival NY Rangers. Jagr could have signed anyplace in the NHL when he decided to return last summer and many thought he’d go back to the Penguins to finish where he started. Jagr deciding on the Flyers was an interesting choice and many including myself were puzzled by the move back in the summer.

At best most thought he’d be a nice complimentary piece of the team that could contribute on an occasional basis and be more of a teacher to the young talent. It turns out Jagr is teaching the young talent on this squad by example each and every night with his top notch performance which just won’t stop even at 40 years old.

In 50 games so far this season Jagr has 16 goals, 26 assists, 42 points and is a plus 7. Considering the time he’s missed with injuries he’s still putting up great numbers for someone at his age. If Jagr continues to stay healthy I expect him to finish with at least 25 goals this season. Jagr now has 16 career over time goals after the Jets game and it’s pretty clear he knows how to put his foot on the gas in crucial situations when the game’s on the line.

During this recent stretch of bad play from the team Jagr was sidelined with an illness and even though they lost to the Penguins last weekend Jagr came back and provided a veteran spark this team needed. Jagr isn’t a goalie so the guys up front can’t do anything about the poor performance of Brzgalov but if they continue to put the pedal to the metal anything can happen as long as they get into the playoffs.

Jagr’s true strength will come in the post season as I expect him to turn it up a notch and display a veteran leadership that others on the team can take advantage of for a playoff run. The way Jagr is playing I fully expect him to make a case to return again next season if not in orange and black then someplace else in the NHL. His game is still there and for those of us in Philly that want to continue to focus on the bad goaltending and poor defense be my guest because it rightfully should be blamed for a lot of the problems as of late with this hockey team.

If this team is to come out of this recent funk and go on a long playoff run besides the fact the defense and goaltending will need to turn around they’ll need to continue to receive great contributions and veteran leadership from Jaromir Jagr. Number 68 is a huge asset to this team and a player we’re lucky to have in Philly. Jagr is showing everyone that 40 is just a number. I don’t believe we’ve seen the best of what he can do just yet and his true value will show over the next few months if the goaltending and defense find a way to turn things around.